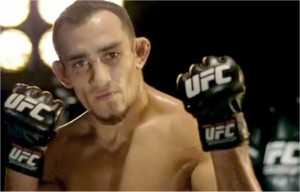 The crowd was ready for Team Alpha Male’s Danny Castillo to take the cage for the co-main event against Tony Feguson. Castillo has been much improved coming into this fight . The Ultimate Fighter winner Ferguson has been impressive in his last two fights. The two would look to move up the ladder in the lightweight division.

The first round was controlled by Ferguson. He was able to lock in a d’arce choke from the standing position and go to his back to control Castillo. Castillo was able to escape. Ferguson snapped some leg kicks that sounded great. It was a solid performance for the TUF winner.

The second round saw Castillo control much of the action but tooks hots from the bottom. Ferguson had some funky rolling knee bar attempts that were off the mark but landed a slew of elbows while he was down. Castillo was heavy on Ferguson and kept him down for much of the round.

The third round went much like the second as Castillo used his wrestling and takedowns to make it his round. Ferguson seemed frustrated and wasn’t able to mount much offense at all. Tough round to call with not much going on for the final five minutes.

It was a hard call for the judges to make. I scored it 29-28 for Ferguson as did two of the three judges. Ferguson seemed content with the win but not happy. Obviously Castillo and the Sacramento crowd thought that he won. “If we were in jail he would have been in trouble” said Castillo talking about controlling Ferguson.

Ferguson notches his third straight win and Castillo drops his second out of three outings.