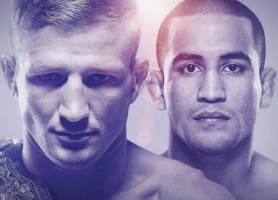 Joe Soto made his UFC debut, against the champion, against all odds and fought like it was just another fight. This fight wasn’t the exciting rematch that we were waiting to see but a solid back and forth battle between Joe Soto and TJ Dillashaw.

Recapping this isn’t hard. The first four rounds were all identical. TJ Dillashaw pushed the pace and his Soto early and often. Soto would counter with some big shots of his own but was always playing defense and the champ bounced back and forth never wearing down.

The fight went into the final round with Dillashaw way ahead on the scorecards but the champ went for the finish and was able to put Soto away with a big shot that dropped him. Big John stepped in and it was all over. Sacramento was happy and the whole Team Alpha Male crew was pleased with the performance.

Click here for results of the entire card and stick around for the post fight press conference right here.