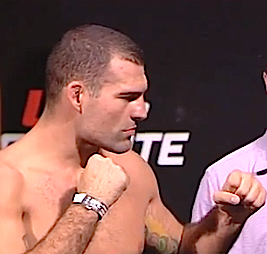 Shogun Rua is one of the best fighters to ever have his hands taped in MMA. He has always looked the part of the nice guy wh0 knocks people out much like Fedor. He was a virtual unknown before his run in the IFC promotion, competing in its 8 man tournament. Eventually he would lose to another well known MMA standout in Renato Babalu Sobral by submission, but it was his first fight of the tournament that showed he was main event caliber.

Eric Wanderley is a big guy and a tough opponent and although he went 3-3 in his MMA career it was a stiff test at the time for Shogun. Rua was 3-0 and we have seen it time and time again that a young fighter fumbles the ball in the early stages of his career, or when fighting on American soil for the first time. Shogun’s first 3 fights were in Rio de Janeiro, Brazil making the IFC tournament his first fight in the United States. To top it all off it was in the high altitude city of Denver and one can only imagine going from Rio’s sea level cage to Denver’s 5,280 feet above. The adjustment was most likely a shock to the system.

These two fights in the IFC tournament showed the world he was a legitimate fighter and while PrideFC may have been the one that made him famous it was his two fights in Denver that showcased his toughness and knockout power. Shogun Rua eventually won the UFC Light Heavyweight Championship, but I still watch some of these older fights to see where he came from.

IFC tournament Round 1  vs. Eric wanderley