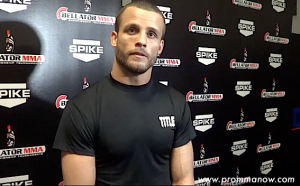 The Bellator MMA promotion will return to the Mohegan Sun Arena on September 5 and will air LIVE on Spike TV. The event will be headlined by the featherweight title fight between champion Pat Curran and challenger Patricio Pitbull.

Curran defeated Pitbull by split decision in 2013, but Pitbull has earned another shot by winning the season 9 featherweight tournament. There is no love lost between the two fighters.

“I’ve been wanting this rematch with Curran for a long time, and it’s finally here,” Pitbull said. “I won that first fight, and I should be Bellator Featherweight Champion right now. This time, I’m not going to let it go to the judges. Curran has started to get cocky and he’s disrespecting me. He has no idea what I’ve been through to get to the title.”

“Pitbull has been running his mouth a lot lately and everyone is sick of hearing it,” Curran said. “I’m ready to shut him up for good. I’m an even better fighter now than I was the first time we fought and I’ll show you him how a true champion fights on September 5th.”