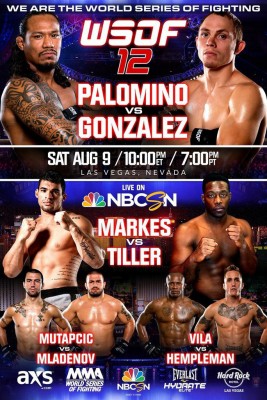 “We had an incredible July event on network television, and our roster is full of hungry fighters who want to have that same type of opportunity,” World Series of Fighting President Ray Sefo said. “We’re happy to be back at Hard Rock Hotel & Casino for World Series of Fighting 12, where all four main-card matchups feature fighters who can really make an impact with a solid performance, and it’s capped off by what looks like a thrilling fight between Luis Palomino and Lewis Gonzalez, both of whom want to be the next to challenge our incredible lightweight champion, Justin Gaethje.”

The evening’s main card airs live on NBCSN. The broadcast begins on Saturday, August 9, at 10 p.m. ET (7 p.m. PT local time). Preliminary contests will be announced shortly and will stream live on NBCSN.com.

Tickets for “World Series of Fighting 12: Palomino vs. Gonzalez” start at just $39 and are on sale now at AXS.com.

The 26-year-old Ronny Markes is a member of Brazil’s famed Nova Uniao fight team, home to some of the top fighters in the world. Markes returns to the 205-pound division, where he won 12 of his 13 bouts as professional before embarking on a four-fight run at middleweight. He now meets the undefeated Kelvin Tiller, who is perfect through the first six fights of his career and now looks to prove himself on a national stage. Tiller has earned four of his six wins by submission, and three of those came in the opening round.

Elvis Mutapcic was a member of World Series of Fighting’s inaugural middleweight championship tournament but suffered a decision loss to tourney finalist Jesse Taylor. Still, Mutapcic is 5-1 in his past six career outings, and 11 of his 13 career wins have come by knockout or submission. Meanwhile, the durable fighter has never been finished, as all three of his losses came by way of decision. He now meets Krasimir Mladenov, who has already notched a pair of wins under the World Series of Fighting banner with past victories over Angel DeAnda and Kendrick Miree.

Alexis Vila remains one of the top bantamweights in the world, even at 43 years old. The Cuban national was a bronze medal-winning wrestler at the 1996 Summer Olympics and is currently 3-1 in his past four fights, with the lone loss coming in a heartbreaking decision result to a game Josh Rettinghouse at World Series of Fighting 6. He now faces Brandon Hempleman, who came up short in a hard-fought No. 1 contender fight against current World Series of Fighting bantamweight champion Marlon Moraes at World Series of Fighting 4. Hempleman lost the fight but gained fans as he weathered an incredible storm of offense in a losing result that snapped six-fight winning streak.