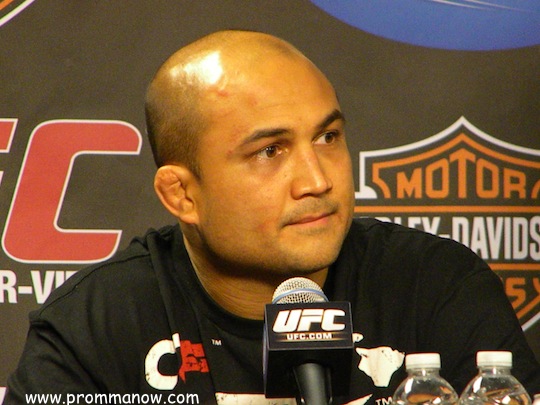 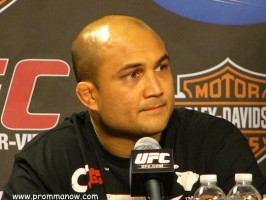 Former UFC welterweight and lightweight champion BJ Penn probably fought for the last time by all accounts on Sunday night, losing via TKO against former UFC lightweight champion Frankie Edgar. It was the third fight between the two fighters as Penn lost a controversial decision against Edgar at UFC 112 in 2010, losing his UFC lightweight title. He lost the immediate rematch via dominant unanimous decision, and of course the loss to Edgar on Sunday night.

Penn’s record stands at (16-10-2) with all of his losses coming against all time greats or against fighters outside of his natural 155 pound weight class. He’s one of the best of his generation and a true fighter to the heart. Below I want to look at the top five moments of his legendary career:

5. UFC 58: Penn fought future UFC welterweight champion Georges St. Pierre to a split decision in a controversial loss. It was a fight that saw the smaller Penn bust up GSP with punches early in the fight, forcing him to use his wrestling skills to take the fight to the mat where he could do little damage against the excellent jiu-jitsu guard of Penn.

4. Rumble on the Rock 4: Penn fought and submitted future PRIDE lightweight champion Takanori Gomi. At the time, Gomi was thought to be one of the best lightweight fighters on the planet, having just lost a majority decision against Joachim Hansen. It was the first bout in which Gomi would fight under ‘unified rules”. It was classic Penn, taking Gomi’s back and securing the rear naked choke as he did five out of his six career submission victories.

3. TUF 5 Finale: Penn fought an submitted Jens Pulver to avenge the first loss of his career after coaching opposite of Pulver on “The Ultimate Fighter” reality show. This fight was Penn’s first lightweight bout since the Gomi fight, and was sort of a rebirth at that weight as he went on to become the UFC lightweight champion for the second time in his next fight against Joe Stevenson at UFC 81.

2. UFC 84: Penn fought and defeated Sean Sherk via third round TKO. At the time, Sherk was coming back to try and reclaim the title that was stripped from him due to a failed drug test. He was seen as a legitimate threat to defeat Penn, however, it was vintage Penn landing a barrage of punches after a flying knee to send “The Muscle Shark” crashing to the canvas while Penn licked the blood off of his gloves.

1a. UFC 34: Penn flatlined Caol Uno via TKO in 11 seconds and ran straight out of the cage to the back of the arena.

1. UFC 46: Penn defeated Matt Hughes via first round rear naked choke in what was a huge upset at the time. Hughes had rattled off 13 consecutive wins and defended his title 5 consecutive times going into the fight with Penn. However, “The Prodigy” took his back and forced the tap and left Hughes with a look of bewilderment on his face afterwards.