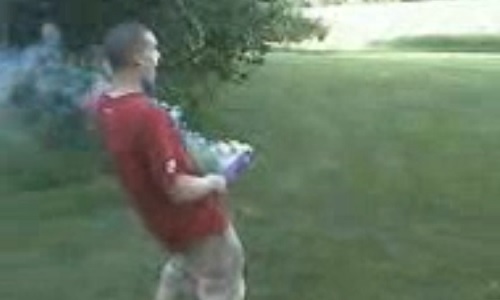 Independence day is a day that should be celebrated – safely. I have a cousin named Matt who every year invents a new way to almost kill himself. He is a creative genius with a penchant for danger. I am a firm believer in safety, but despite that fact I am always drawn to completely risky situations. I have even been convinced to jump over fireworks that were shooting sparks and to hold a firecracker in my hand. Yep, I am that dumb.

We all know that every year a whole lot of rednecks utter the words “Hey y’all watch this” before ultimately blowing something up unintentionally. Fireworks are fun and a celebration of freedom, but in some cases they are dangerous. ProMMANow.com takes a look some of the best fireworks gone wrong videos from around the net. We remind our readers to be safe or you may end up on next year’s list.

WHEN OLD MEN PLAY WITH FIREWORKS

45MM SHELLS EXPLODE ON THE GROUND

BRO, YOU’RE NOT A SUPER HERO

REDNECK WITH A BOW AND ARROW – WITH A MORTAR ATTACHED…

ALCOHOL AND FIREWORKS, GUESS THE OUTCOME