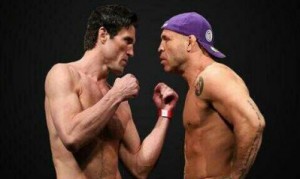 The Ultimate Fighting Championship’s (UFC) Wanderlei Silva admitted that he ran from the random drug testing fearing that they might find diuretics in his system.

Silva, along with his lawyer, told the NSAC that he was taking diuretics along with anti-inflammatories prescribed by an actual UFC doctor to help recover from a fractured wrist.

“He was taking diuretics for the sole purpose of minimizing the inflammation, to decrease the water retention”, Silva’s lawyer Ross Goodman told MMAFighting.com, “He now realized that he should have submitted to the drug test”.

Wanderlei admitted he was completely shocked when they showed up to take a sample.

“It was the first time in his career where something like this, out of competition, somebody showed up at his gym,” said his lawyer.

Diuretics are classified as banned substance mainly because they are often used to prevent detection of banned/illegal things in an athlete’s system. They dilute the urine so it is much more difficult to detect these substances.

His lawyer finished with this claim of innocence.

“Wanderlei Silva has been fighting for 20 years, has over 50 professional fights, and has never failed a drug test,” said the lawyer. “That doesn’t negate or minimize what Mr. Silva did. He’s here to apologize to the commission, and he was concerned that the diuretics would show up on his sample.”

The NSAC is expected to determine the potential disciplinary action to be taken against Silva.