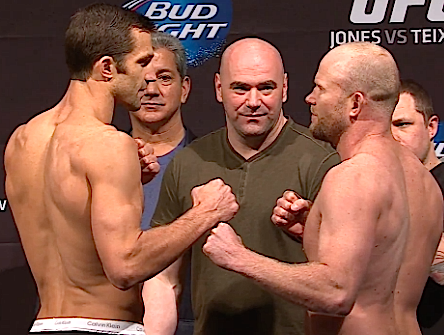 Oddsmakers aren’t giving No. 13 ranked middleweight Tim Boetsch much of a chance against No. 5 ranked Luke Rockhold on tonight’s UFC 172 card. Boetsch (17-6) is coming off a split decision win over CB Dollaway, but had dropped back-to-back bouts against Mark Munoz and Costas Philippou prior to that.

The 33-year-old Barbarian does hold a UFC win over smashing machine Hector Lombard, and who can ever forget his comeback TKO win over Yushin Okami at UFC 144? So why is Boetsch not getting the love from the oddsmakers?

Although Rockhold is only 1-1 inside the Octagon, he is coming off a TKO via body kick win over Costas Philippou back in January — and Philippou is one of only two people to finish Boetsch via strikes. Now, there is that spinning heel kick KO Rockhold suffered from Vitor Belfort in his UFC debut last year, but other than that, the 29-year-old AKA surfer dude has looked quite solid. And he holds notable wins over the likes of Tim Kennedy, Keith Jardine and “Jacare” Souza in Strikeforce.

Rockhold certainly seems the safe bet, although I’d give the punching power and dirty boxing edge to Boetsch.

In the main event, Jon Jones (19-1) is a pretty heavy favorite over Glover Teixeira (22-2), and rightfully so considering his list of accomplishments inside the Octagon. But we can’t sleep on Teixeira, he can end the fight standing or on the ground. His biggest problems though will be Jones’ reach and speed, as well as the fact he sometimes leaves himself vulnerable and takes too many shots.

In the co-headliner, Phil Davis (12-1, 1 NC) is the favorite and will most likely need to rely on his footwork and wrestling if he’s going to defeat the hard-striking Anthony Johnson (16-4). “Rumble” could certainly upset Davis if he connects and it’s a very important fight for them both as an impressive finish could put either of them next in line for a title shot.

Jessamyn Duke vs. Bethe Correia is the closest matched fight on the card according  to oddsmakers.

The full UFC 172 fight odds include: