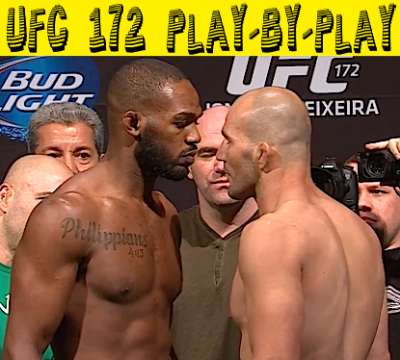 UFC 172: JONES VS. TEIXEIRA takes place this evening at Baltimore Arena in Maryland. UFC Light Heavyweight champ Jon Jones puts his title on the line once again against heavy-handed Glover Teixeira in the main event. Also, Phil Davis will try to move one step closer to a title shot as he takes on KO artist Anthony Johnson in his UFC return.

ALSO: Be sure to stick around after tonight’s fights to watch the UFC 172 post-fight press conference LIVE stream and on-demand replay.

Round 1 – Touch gloves. Inside leg kick from Williams. Beal fires back. Williams lands a knee to the groin and time out is called as Williams tries jumping on Beal’s back. Back at it. Leg kick from Williams. Nice left hand. Beal trying to counter with punches but Williams avoids the attack. Williams with a counter right uppercut followed by a takedown. Beal gets to his feet, eats a knee, they trade punches. Reset and square up. Leg kick Williams. Right counter from Williams. He catches a kick from Beal and dumps him on his back, now inside Beal’s full guard. Under two minutes to go. Beal gets up, lands a knee before they break. Beal looks very relaxed, stalking. Beal with a couple punches, Williams lands a leg kick. Right counter from Beal, Williams on the run now. Left hook from Beal. Leg kick Williams. Beal tags him with a right and left before the bell and Williams is bleeding from the top of his head. PMN sees the round 10-9 for Beal.

Round 2 – Clinch, knees from Beal. Williams with a lot of lateral movement. Beal catches his kick and fires off several punches. Clinch, knee from Williams. Williams wipes off his feet on the mat, moves laterally trying to stay out of range of Beal’s strikes — then Beal lands a perfectly timed flying knee on Williams’ chin and Mr. Williams falls to the mat unconscious. Incredible debut for Beal!

Round 2 – Leg kick Brenneman. One huge lunging right hook from Castillo lands on Brenneman’s chin — and he falls flat on his back unconscious. Wow!! Immaculate knockout!! Good luck picking KO of the Night tonight!!

Check it out as Correia shows she’s taken out one of the 4-Horsewomen in this GIF… who’s next?

Round 3 – Body shot from Gomi. Several jabs follow as he targets that swollen eye. Leg kick from Flagg. Left hook to the body from Gomi. Flagg fires back. Gomi looks for the takedown, Flagg defends. But he ends up getting Gomi down and is landing punches before he gets back up. Gomi clinching and pressing Flagg to the cage. Knee to the body. Flagg turns him around. Cheers for “Gomi”. Knee to the body from Gomi. Flagg lands a right elbow. Gomi escapes to the center, they trade punches in the pocket. Flagg lands a knee. Flagg presses Gomi to the cage as half the round is gone. Gomi turns him around. Knee from Flagg. Gomi backs out, stiff jab and a big punch combo, another big right from Gomi. Flagg is bleeding badly now from around his eye. Gomi teeing off before the clinch up and he presses Flagg to the cage. Gomi with undercooks, gets a body lock from the back. Knees to the thigh. Flagg now has a body lock from behind and drags Gomi down. Only 20 seconds to go though. Gomi gets top position with 10 seconds left. Flagg with a few elbows off his back. Gomi hops up on the cage, they hug, then Gomi falls to his back, happy and exhausted. PMN sees the round 10-9 and the fight 30-27 all for Gomi.

Round 1 – Elliott comes out quick with punches, gets a takedown. Benavidez has a guillotine position, but Elliott is free and they are back up and swinging. Left hook from Benavidez. Elliott with a nice judo throw takedown. Ellioot locks up a crucifix off his back now switches to a handcuff position, now on top inside guard. Benavidez with elbows off his back. Elliott looking great so far. Benavidez back to his feet. Right hand from Elliott. One two from Benavidez. Body kick. Again. Elliott times a takedown, goes for his back, scramble, Benavidez has a front headlock, now on top in half guard, still holding the neck. Benavidez looking for mount. Elliott preventing it so far. Benavidez in side mount, still holding the neck. Now Benavidez is on top with a guillotine locked up, Elliott squirming and has to tap out using his feet because his arms are tied up. Great showing from Benavidez.

Round 3 – Leg kick Fili, he shoots for a single but Holloway defends and lands a knee to the body. Leg kick from Fili. Right hand, overhand right follows. Fili times a takedown and is inside half  guard. Holloway right back to his feet and looks for a trip of his own. Nope. Right hand from Holloway. Body kick, jab from Fili. He shoots, stuffed. Jab from Holloway. Fili shoots, Holloway looking for a guillotine, Fili presses him to the cage though and goes for a single. Fili goes for a shot after Holloway lands some punches and Holloway locks up a guillotine choke and Holloway taps out.

Round 1 – Touch gloves. Body kick from Boetsch. Leg kick. Boetsch catches a leg and gets a takedown. They roll and Rockhold locks up a triangle choke from the top. Elbows to the back from Rockhold. Rockhold now targeting a kimura while still in a triangle from the top. Rockhold cranks the kimura from the top and Boetsch is forced to tap out. Wow! Rockhold calls out Vitor Belfort & Michael Bisping after the fight.

Round 3 – Davis’ corner telling him he needs to finish him to win. Touch gloves. Right to the body from Johnson. Jab from Johnson. Front kick Davis, two rights from Johnson. Davis shoots, stuffed and eats a right hand. Johnson blocks a head kick. Right from Davis, shoots, stuffed. Body shots from the clinch from both guys. Nice knee from Johnson on the break. Leg kick Johnson, big left hook follows. Stuffs another takedown attempt. Leg kick Davis. Front kick to the body from Johnson. Johnson ducks a high kick. Davis shoots and Johnson throws him down. Just misses a head kick on the way up. Davis looking for the single against the cage. No can do. Johnson blocks a high kick. Jab from Davis. Another. Johnson shoots for a single, Davis looking for a kimura, but that’s it. PMN sees it 10-9 and 30-27 for Johnson. Complete domination. Johnson new he was way ahead and probably played it a little safe, but one can hardly blame him at this point in his career.

Round 2 – Greg Jackson tells Jones to “find his waterfall” between rounds. :) Jones shoots, stuffed. Inside leg kick from Jones. Nice overhand left from Jones. Front kick to the body. Switches stances. Axe kick again from Jones, oblique kick, side kick, elbow from Jones stuns Glover. Glover shoots in and Jones pokes Glover in the eye. Ref stops the action and warns Jones that he will take a point next time. Jab from Jones. Nice left hook from Glover, body shot. Jones seems okay. Best shots of the fight from Glover. Head kick, straight punch and an elbow from Jones. Body hook from Glover. Two elbows from Jones, clinch. Left hook from Jones. Oblique kick again. Again. Again. Spinning back  kick lands, shoulder strike. He may have hurt his right hand because he’s not using it. Fortunately for him he has tons of other tools. PMN sees it 10-9 Jones.

Round 4 – Glover has a huge cut over his right eye. Championship rounds. Side kick to the body from Jones. Left hook Jones. Jones presses Glover to the cage. Glover ducks a spinning elbow. Glover shoots, stuffed. Jones with an elbow and a knee in the clinch, looking like a surgeon. Jab from Glover. Then his mouthpiece falls out from a jab and they rinse it off. Body kick from Jones. Jab from Jones. Leg kick inside. Elbow. Side kick to the leg, slicing elbow. Uppercut. Oblique kick, uppercut. Knees from Jones to the body. Spinning elbow lands. Glover fires back but not much on them now. Elbow from Jones. More elbows inside from Jones, right in the clinch, dirty boxing at it’s best. Elbows and knees continue from the champ. They move to the center and Jones gets a takedown and lands some punches before the bell. PMN sees the round 10-8 for Jones.

Round 5 – Glover apologizes to Coach Hackelman and Hackelman tells him don’t be sorry. Hackelman tells him he needs to KO him to win. Jones with a takedown but Glover is right up. Jones pressing him against the cage though and Glover is already bleeding. Uppercut from Glover, they trade left hooks. They slug it out in the pocket and Glover’s mouthpiece flies out again. They wash it off. Left hook, elbow from Jones. Body shot, right hook, and another from Glover. Elbow from Jones. Big uppercut from Glover in the clinch after eating some big shots. Back elbow from Jones. Left hand from Glover. Jones misses a flying knee. Uppercut from Glover in the clinch, he pushes Jones back. Body kick from Glover. He’s almost clowning Glover. It goes the distance as Jones evades Glover’s attack for the last 20 seconds. PMN sees it 10-9 and 50-44 for Jonny Bones Jones.