Leo Frincu, world class athlete, trainer and coach of UFC superstar Ronda Rousey, has published “High Performance Mentality”, a book designed to take athletes and non athletes to the next level. It’s a book loaded with tools and insights designed to help individuals reach their highest potential in athleticism.

“Mentally, you’re just starting and finishing an exercise, but you’re not there to actually acknowledge and learn from the core process. You’ll put in the effort, but you won’t learn about the one who’s done the work—you. You’re going to look at the clock and notice that an hour went by, but your confidence won’t notice any change. You’ll sweat and tear up muscle fiber, but your doubts will still be there. You’ll breathe but you won’t recover. You’ll complete a training camp, but you’ll still have the need to do more. Your body will start breaking down, but you’ll still be running behind. By preoccupying our minds while punishing our bodies, we end up over-training but still feel that we haven’t trained hard or long enough.

“You’ll experience all of this when you focus on what’s going out rather than what’s coming in. You will get to the competition and all of a sudden wonder why you still doubt yourself. The answer will be because you were never present during training. You never acknowledged the growth process. You zoned out versus zooming in. You breathed out but never really inhaled. Essentially, you sabotaged your entire training period by wasting 60 percent of your training time because your mind and body were completely disconnected.”

“High Performance Mentality” by Leo Frincu is now available for Kindle on Amazon for only $3.99. 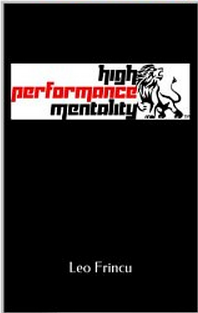 ABOUT LEO FRINCU
Leo Frincu came to the United States from Communist Romania with $10, a back pack and four words of English. Now, he’s a businessman, renowned trainer and mentor for UFC women’s bantamweight champion Ronda Rousey. Among his many athletic accomplishments, Leo is a six-time Romanian wrestling champion, four-time European champion and was also trainer and coach for the 2003 U.S. Olympic Wrestling Team. Leo is also the author of the book, “Choosing Freedom,” which details the steps he took to leave the oppressive Romanian society through wrestling and how his experiences have helped him in the United States – going from a bus boy to successful entrepreneur.