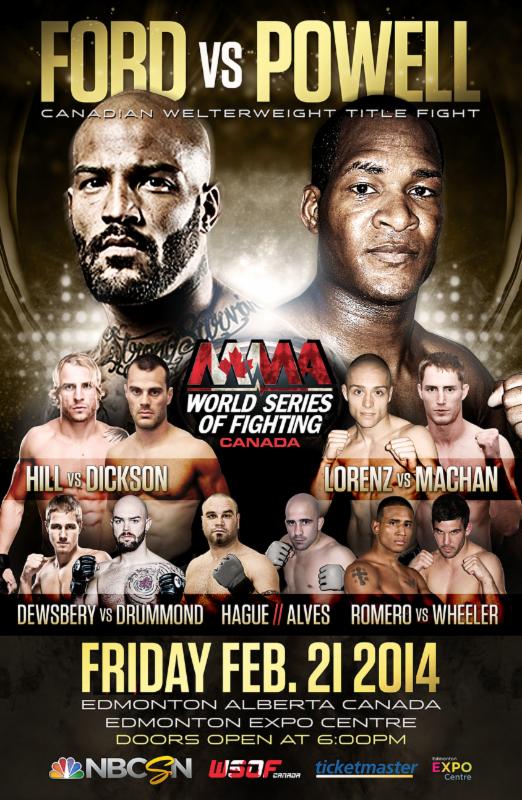 World Series of Fighting Canada will crown its first Canadian welterweight champion, as one of Canada’s best, Edmonton, Alberta’s own Ryan “The Real Deal” Ford (21-4) takes on the KO artist Joel Powell (7-3) of Hamilton, Ontario.

The bout headlines “World Series of Fighting Canada: Ford vs. Powell,” which takes place Friday, Feb. 21 at Alberta’s Edmonton Expo Centre. Tickets for the event, which start at just $60 and include cageside seats for just $180, are on sale now at Ticketmaster.com. Tickets are already almost sold out!

“World Series of Fighting Canada: Ford vs. Powell,” which will feature a full lineup of top Canadian talent airs on NBCSN on Feb. 28 at 9 p.m. ET.

“Ford and Powell have been on a collision course this past year, as both guys have just been steamrolling their opponents,” World Series of Fighting Canada COO Darren Owen said. “This fight was supposed to happen in July, but injury forced Powell out of the matchup, and Ford went on to claim the Aggression Fighting Championship welterweight title against Michael Hill. In that fight, Ford broke his arm early in the first round but went on to submit Hill late in the fifth round with the broken arm. Both fighters are now healthy and injury free and will put on what a lot of people think will be a fight-of-the-year type performance.”

MMA fans know Ford for his aggressive fighting style and remember his wins over MMA notables Luis “Sapo” Santos, Karo Parisyan and Pete Spratt, among others. Ford has won nine out of his past 10 fights and has 19 finishes in his 21 career victories.

Powell has been on a tear as of late, winning 6 out of his last 7 bouts since 2008, while boasting an undefeated record while competing as a welterweight. With wins over Brandt Dewsbery, Advin Omic, George Lockhart and Michael Hill.

The winner of this main event will be crowned the inaugural World Series of Fighting Canadian welterweight champion.

In the night’s co-main event, top heavyweight prospects collide as the heavy-handed Smealinho “The Prince” Rama (6-1) meets (4-0) Steve Mocco a U.S. Olympic wrestler who is widely considered one of the greatest wrestlers in US history. Mocco is also regarded as one of the top Heavyweight prospects in all of MMA who owns 5 wrestling victories over UFC Champion Cain Velasquez.