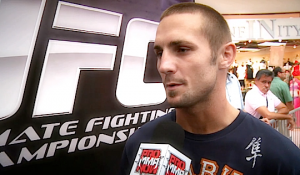 Fresh off a bantamweight title shot against Renan Barao last September, Eddie Wineland steps back in the Octagon this Saturday as he faces Yves Jabouin on UFC on FOX 10‘s preliminary card airing live on FOX Sports 1.

Though it’s a busy week for Eddie, he was kind enough to speak with ProMMAnow.com about his upcoming fight as well as his thoughts on next week’s Renan Barao vs. Urijah Faber main event.

PRO MMA NOW: Hi Eddie, thanks for taking time out of this busy week to speak with us. How was your training for this fight with Yves Jabouin — everything on point and feeling good?

EDDIE WINELAND:Training was awesome…Had a great camp and I’m in great shape, eager to perform!

PRO MMA NOW: Can you tell us a little about some of the coaches and guys you work with up there in Indiana?

EDDIE WINELAND: Mark Vives, Bob Hemmerich, Keith Wisniewski, and my strength guy Jason Gusic. All extremely humble guys, people I consider my best friends. They always have my best interest in their mind.

PRO MMA NOW: You are coming off a fight with champion Renan Barao, and now you’re facing Jabouin, who is not ranked in the top 15 on the UFC’s official rankings. What were your initial thoughts on this match-up when you were presented with this fight?

EDDIE WINELAND: Yves is still a tough fight that possesses many problems. Though there isn’t a number attached to his name he is still very dangerous. I’ll be on point and ready to shut him down!

PRO MMA NOW: Sometimes you hear guys say “it’s hard to get up for this fight”. Were there any issues with you getting motivated to fight Jabouin?

EDDIE WINELAND: No issues at all, I get to fight another man…it makes me happy to test myself at the ultimate level. The win and to out-perform the man in the cage is my motivation.

PRO MMA NOW: Both of you have a ton of knockout wins on your record, who do you see having the power advantage on the feet?

EDDIE WINELAND: For sure I think I’m the bigger power puncher, I think he’s a little more dynamic with his spinning stuff but straight down the pipe gets there faster!

PRO MMA NOW: Where do you think your biggest advantage will be in this fight?

EDDIE WINELAND: Stronger, faster, better conditioned, I think I’m going to be able to press on him and make him feel very tired.

PRO MMA NOW: You’ve fought both Renan Barao and Urijah Faber, what are your thoughts on their upcoming title fight and how do you see that one playing out?

EDDIE WINELAND: I think it’s a great fight, Faber has earned his spot there. I like both guys but at the end of the day I’m rooting for Faber to pull it out.

One thought on “UFC on FOX 10: Seven questions with Eddie Wineland”