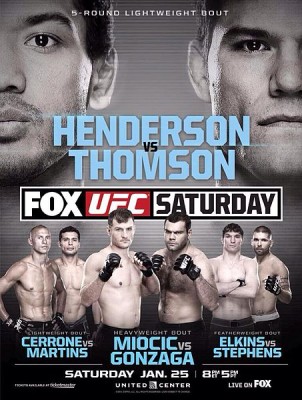 It has taken 18 days but we will get to see a UFC card on a Saturday night! This weekend the crew returns to Chicago for UFC on FOX 10. The four fight televised card looks intriguing to us so we have assembled our crack team of analysts to give you the low down on who should win, who will lose and who is the best staff member when it comes to picks.

You can get the full run down of play by play and fight recaps here at ProMMAnow (www.prommanow.com). Chime in with your own picks in the comment section below or just tell us how great our picks were.

Jack Bratcher: With 15 of his 22 wins coming by knockout Jeremy Stephens has the power advantage in this fight. He’s currently riding back-to-back wins over Rony Jason and Estavan Payan. Elkins is coming off a decision win over Hatsu Hioki. I think this one will go the distance with Elkins grinding out a decision win. Pick – Darren Elkins via decision.

Jason Kindschy:  Elkins is a really scrappy wrestler that always comes to fight. He’s coming off the win over Hioki back in August and I’d imagine he feels confident about the style match-up against Stephens. However, I think LIl’ Heathen is a serious problem for anyone in the UFC’s Featherweight division. I see Jeremy starting fast, stifling some takedown attempts from Elkins and eventually landing some heavy leather for the KO. Pick – Jeremy Stephens via KO Round 1.

Gary Thomas: Since coming to featherweight Stephens looks amazing. He has the ability to knock people out at will. Elkins is more methodical and brings more of a wrestling aspect to the fight. Elkins will have to avoid that power of Jeremy and make this one go the distance, which I think he will. Pick – Elkins via decision.

Jack Bratcher: They are giving Cerrone a fight with a guy who’s fought once in the UFC, scoring a submission win over Daron Cruickshank. Most of Martins wins have been by knockout, where the majority of Cerrone’s wins have come via decision. Power advantage goes to Martins, while the submission advantage goes to Cerrone. Cerrone all day. Pick – Donald Cerrone

Jason Kindschy: Many people are counting Martins out in this fight, saying he doesn’t deserve a fight like this against a high ranked opponent in Cerrone, and I honestly don’t blame them. While his jujitsu is top notch and I have no doubt the Brazilian is very motivated to seize the moment, I don’t think that will be enough to get the job done. Don’t get me wrong, Martins does have the BJJ credentials to sub Cerrone, I just don’t see it happening. That’s what makes this bout dangerous for Cowboy, he should win this fight and he kind of needs to in my opinion. Cerrone says he feels the fire of competition again and I believe him. Look for a kickboxing clinic in this fight, with Cowboy punching and kicking his way to a finish. Pick- Cerrone via TKO Round 2.

Gary Thomas: Hard to bet against Cerrone. This fight seems kind of odd. Who is Martins? I know he beat Jorge Gurgel in the opening bout of the final Strikeforce card but that’s all I know. He does have some knockout power and won a “Submission of the Night” bonus in his UFC debut but c’mon folks, we are talking about Cerrone. If Cerrone comes in focused, he’s damn near unbeatable. Write the check. Pick – Donald Cerrone via submission Round 2.

Jack Bratcher: Miocic’s only loss thus far was to the giant Stefan Struve. That could be an anomaly. He’s coming off a decision sin over Roy Nelson which is no small feat. If Miocic can keep it standing, his athleticism and speed should allow him the win. However, if Gonzaga connects, he can put you to sleep, and if it goes to the ground he can submit most. I love Gabe but I’m going to have to take Miocic via decision. One more thing… I want to see Frank Mir vs. Gabriel Gonzaga sometime down the road. Pick – Stipe Miocic via decision.

Jason Kindschy: Who doesn’t like Gabriel Gonzaga? The guy is like a big grappling teddy-bear who will take your cookies and has some of the best finishes in the UFC. Stipe has a ton of talent, great work ethic from what we have seen so far and he does have a great style to beat Napao, but Gonzaga boasts the experience and power. I would anticipate that Miocic starts working his jab early, staying mindful of the takedown and keeping a high pace. Gonzaga on the other hand, looks to counter, fakes a few takedowns and catches Stipe coming in with a big right hand. Pick – Gabriel Gonzaga via KO Round 1.

Gary Thomas: The winner in this heavyweight tilt will be in title talks this year. Gonzaga is brutal but let’s not forget he has a solid ground game. That being said, Stipe is too athletic to lose. I see him peppering Gabe on the feet for three rounds and getting his hand raised in a decision. Pick – Stipe Miocic via Decision.

Jack Bratcher: Although Thomson says he had one of the worst training camps of his career, I like his ability to finish fights much more than Henderson. Thomson has dealt with grinders like Henderson before and I think he’ll be prepared. Somewhere during the five rounds he should be able to hurt and stop Bendo. Pick – Josh Thomson.

Jason Kindschy: This main event should be a war in my opinion. Bendo is an ever-evolving martial artist with a work ethic that rivals any of the best athletes in the world. Thomson is a warrior with a ton of heart and some very slick technique, but has recently admitted that his camp for this bout was terrible. Regardless, expect a high pace battle from bell to bell, with Henderson being the aggressor and Thomson firing back every chance he gets. I think the wrestling and the explosiveness of Henderson determines the outcome of this fight, but I won’t count Thomson out of making this a scrap. After 5 rounds of excitement, Henderson gets the nods with no controversy. Pick – Benson Henderson via Decision.

Gary Thomas: With all due respect, Josh Thomson has never impressed me.  I know he has been in some wars and has been near the top of the heap for a long time but first impressions mean a lot and his performance against K.J. Noons in Columbus. Henderson seems to respond well from a loss but how did he recover from that injury? Henderson can grind this one out and probably will for a five round decision. Pick – Benson Henderson via Decision.