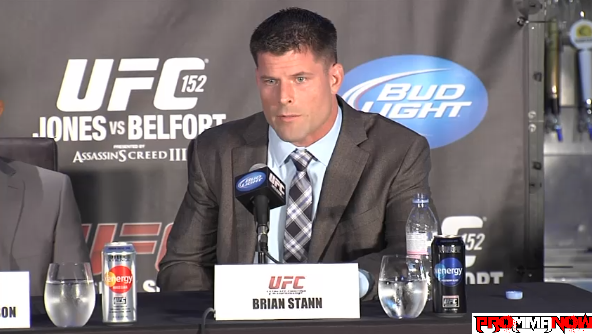 Fighter turned analyst, Brian Stann, was called in to replace Kenny Florian this past Saturday at UFC Fight Night 34 in Singapore. He commentated for all ten of the fights that took place at the event alongside resident “Fight Night” analyst Jon Anik.

Stann has commentated at a UFC event before, replacing Joe Rogan at UFC 163 in August 2013, and considering it was only his second time commentating for a big event I think he did a great job. Brian’s knowledgeable, but not overly technical analysis of the fights coupled with Anik’s color commentary worked really well in my opinion.

With the UFC holding more and more events each year I think Stann makes a welcome addition to the select team of commentators they currently use. Don’t get me wrong, I love listening to Joe Rogan and Mike Goldberg calling the big fights, and I am not suggesting that this formula should change, I just think it’s great to have knowledgeable and experienced guys like Brian Stann waiting in the wings to fill the gaps.

Brian announced his retirement from mixed martial arts in July 2013 and has since gone on to become a commentator for ACC football games on FOX Sports South, he also appears regularly as an analyst on the UFC Fight Night events that air on FOX Sports 1. It seems only natural that the former U.S. Marine has moved into commentary and I think it works pretty well.

However, I did notice one small error whilst watching UFC Singapore on Saturday. When Stann was conducting a post-fight interview with Tatsuya Kawajiri, a Japanese fighter who can barely speak a word of English, he forgot to let the translator explain what he had actually said in English. I’m guessing he got caught up in the moment and forgot that part, it was quite funny, and in a weird way I think we still got an idea of what Kawajiri was trying to say, so it’s not really a big deal.

With more experience under his belt I am sure “The All-American” will get even better. What did you guys think of his commentary?