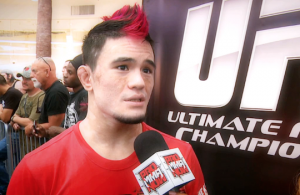 The injury bug strikes again and Scott Jorgensen awaits his third opponent for UFC on FOX 9. It was announced that John Dodson has suffered a knee injury and has been forced out of his flyweight bout with Jorgensen next week. This leaves little time for UFC officials to find a replacement to fight in the flyweight spot.

Jorgensen, a two time fight of the night winner, is just 1-3 in his las four outings. The record doesn’t reflect that he has fought elite competition.The losses came to bantamweight powerhouses Urijah Faber, Eddie Wineland and interim champ Renan Barao. He defeated John Albert last December in a fight that netted him submission of the night as well as fight of the night. Jorgensen was originally set to meet Ian McCall. McCall withdrew due to injury as well.

Dodson most recently knocked out Darrell Montague to improve to 4-1 inside the Octagon. His only loss has been to champion Demetrious Johnson. Dodson was the winner of The Ultimate Fighter 14 back in 2011.

A replacement for Dodson is expected soon. UFC on FOX 9 takes place on December 14th at Sacramento’s Sleep Train Arena. Here is how the card looks now.