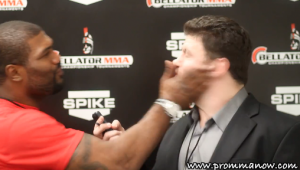 ProMMAnow.com reporter Dan “The Wolfman” Theodore caught up with Quinton “Rampage” Jackson at Bellator 106 over the weekend in Long Beach to get his thoughts on the event he was originally supposed to headline versus Tito Ortiz on Pay-Per-View. Of course that fight fell through and Rampage will now face former UFC heavyweight-turned-light heavyweight Joey Beltran on Nov. 15 on Spike TV. Aside from our reporter Dan “The Wolfman” comparing his own howl to Rampage’s, he ends up getting an Inoki-style slap across the face from the fighter before it’s all over. Oh Dan….