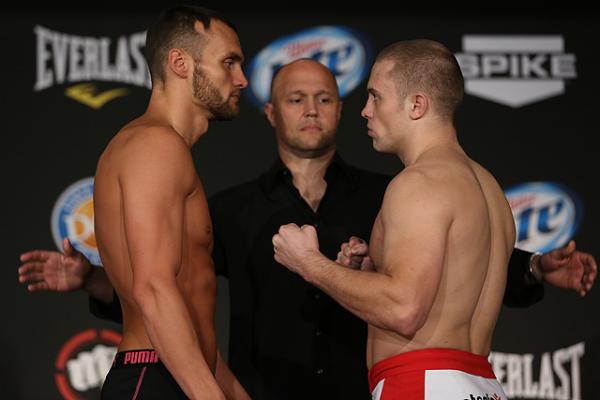 The second fight of the night at Bellator 102 in Visalia, California is another middleweight tournament semifinal match-up between Mikkel Parlo and Jason Butcher. This also is a classic striker versus grappler matchup and will be sure to excite the fans seeing as Parlo is a great Dutch kickboxer and Butcher a phenomenal submission artist. So let’s get into the breakdown.

Mikkel Parlo has ten wins and one loss in his 11 fight  career with seven of those wins coming by way of knockout and has trained in the dutch style of kickboxing for years. He is currently training out of Xtreme Couture in Las Vegas to better well round his game, but make no mistake about it, he’s a striker.

Butcher is a pretty well rounded individual himself, though he specializes in the grappling, he has two wins by (T)/KO along with his five by submission. Most recently, in his last fight he defeated Giva Santana by way of TKO. Let’s be frank here, sure he has some power but Butcher is definitely a submission artist.

Though we mentioned Parlo is a kickboxer, he is no slouch on the ground, he has one win by submission in his Pro career and two submissions in his amateur career. Again to be honest, Parlo probably isn’t going to submit a ground specialist like Butcher in a fight like this, but on the ground he does have good submission defense.

Butcher is one mean dude when the fight hits the mat. In his pro career he has five of his seven wins coming by way of submission. Of these five submission wins, Butcher has three of those coming by way of triangle choke, one guillotine, and one armbar. So it seems that Butcher is a man with a very dangerous guard, who knows maybe he’ll pull guard.

Parlo as I said has been training out of Xtreme Couture with some of the best wrestlers one can find in the sport. So on top of his submission game, he is learning some great grappling skills to put the fight wherever he wants it (probably keeping it on the feet). With that being said, will he be able to keep the fight standing against Butcher?

Butcher as we have said is a great submission fighter. Though through research I have found that he has no wrestling background. This is a little troublesome when seeing he is fighting an Xtreme Couture fighter in Parlo. So with that being said, the only thing we can factor in is his submission skills.

Verdict: Slight edge goes to Parlo due to camp.

This matchup has the chance to be a very close one, as most Bellator matches seem to be. Both men are well rounded, even though they have their specializations. I have to go with my gut feeling here and pick Parlo because of his training camp. When you are training with the likes of Randy Couture, Jay Hieron, Vinny Magalhaes, and Michael Chandler it really gets you ready to fight. I think Parlo will take a second round TKO.