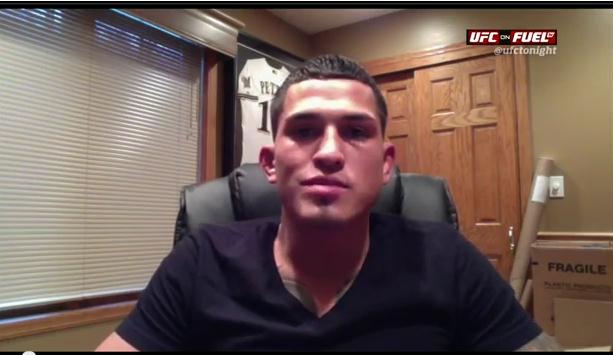 UFC 164 saw Anthony “Showtime” Pettis defeat Ben Henderson for the second time to become the newly crowned UFC lightweight champion on Saturday night in front of his hometown crowed in Milwaukee, Wisconsin. Pettis was injured his knee during the fight and could be out of action for a while according to UFC President Dana White.

However, Pettis called out UFC featherweight champion Jose Aldo in his post-fight interview with Joe Rogan before it was known that he was injured. It’s so called ‘super-fight’ between two of the best lighter weight fighters on the planet, however, it’s a fight that doesn’t make a lot of sense for a number of reasons:

Here are the top four fights to make between the UFC lightweight and feathertweight divisions:

Some folk may argue that Chad Mendes should get the title fight against Jose Aldo over Lamas, but I disagree because Mendes already has a loss to Aldo. Also, Mendes is on an impressive run but two of his last four wins have come against fighters not even close to top 20 fighters. Lamas has won four in a row with three of those wins coming against guys that were thought to be challengers to Aldo  in Cub Swanson, Hatsu Hioki, and Erik Koch). Swanson is a top 10 fighter now and both Hioki and Koch were ranked when Lamas beat them.

TJ Grant was supposed to fight Ben Henderson for the title on Saturday night, but he suffered a concussion in training and had to pull out of the bout allowing Pettis to take his place. Grant has won five consecutive fights with three finishes, including a annihilation of former two time number one contender Gray Maynard in his last outing.

To his credit, Chad Mendes offered to fight Ricardo Lamas in a ‘number one contender match’ via his Twitter account today if Jose Aldo can’t fight for a while. Aldo reportedly injured his foot in his last outing against “The Korean Zombie”. Cub Swanson has rattled off five consecutive wins with his last loss coming against Ricardo Lamas. The last loss before the Lamas fight was against Chad Mendes, so if Swanson could avenge that loss there would be no debating if he deserved another shot at Aldo(or whoever the champ would be at the time).

Rafael dos Anjos just won an impressive unanimous decision against top 10 lightweight Donald Cerrone. Dos Anjos is riding a five fight winning streak and needs another win over a highly ranked fighter to challenge for the title. Josh Thomson defeated top 10 lightweight Nate Diaz in his last outing and has fought tooth and nail in three fights with Gilbert Melendez who just fought for the title and lost via split decision. If dos Anjos could get by Thomson he certainly would be deserving of the next title shot. If not, the argument could be made for Thomson based on his resume and two wins over top 10 lightweights if he could get past dos Anjos.

The point is that a fight between Pettis and Aldo is not worth screwing up two weight divisions when there are clear contenders in each division unless the bout is done as a catchweight. However, none of that seems likely as Aldo is recovering from a foot injury, and Pettis doesn’t know the extent of his knee injury at this time. These four fights I’ve proposed would make for great fights that actually have meaning within each division.

Discuss in the comments section if you agree or disagree.