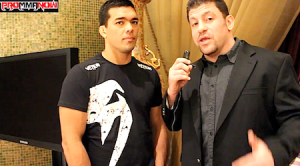 ProMMAnow.com (www.prommanow.com) reporter Dan “The Wolfman” Theodore caught up with former UFC light heavyweight champion Lyoto Machida over the weekend at RFA 9 and discussed a couple of potential fights he has recently been linked to in the news.

Machida explains why he feels fighting Vitor Belfort in Brazil makes a lot of sense and why it’s a good match-up. He also shares his thoughts on a potential bout with Nick Diaz, as well as former Strikeforce middleweight champ Cung Le. “The Dragon” also says he’s ready to move to middleweight if need be and talks about a couple of his students on the RFA 9 card.