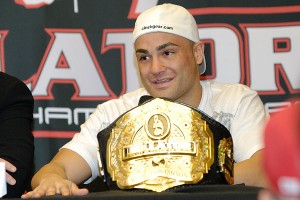 Former Bellator Lightweight Champion Eddie Alvarez‘s nightmarish contract dispute with the Viacom-owned mixed martial arts promotion has finally come to an end… at least for the time being.

Alvarez and Chandler first clashed back in Nov. 2011 at Bellator 58 when Chandler took Alvarez’s Lightweight Title with a fourth-round Rear-Naked Choke Submission. The loss has haunted Alvarez ever since. On Nov. 2 he will get his shot at redemption and finally get back to work after more than a year on the sidelines. Alvarez commented:

“I still lose sleep over my loss to Chandler, and I want it off my record. This was a long process, but at the end of the day I’m back with Bellator and I’m happy to get back in the cage. I really believe everything happens for a reason, and at the end of the day my family and I are happy, and I’m ready to get my belt back on November 2nd.”

Since the loss to Chandler, Alvarez has scored two straight knockout victories; the first over Japanese ground wizard Shinya Aoki in April 2012, and then over Bellator Season 4 Lightweight Tournament Finalist Patricky “Pitbull” Freire in October 2012.

Chandler is a perfect 9-0 inside the Bellator cage. Since taking the title from Alvarez in 2011, the 27-year-old Missouri native has won three straight bouts, all stoppages, including title defenses over Rick Hawn in January and David Rickels in July.

Bellator Chairman & CEO Bjorn Rebney shared his thoughts on the Chandler vs. Alvarez rematch — a bout which won “Fight of the Year” the first time — and its addition to Bellator’s foray into Pay-Per-View:

“I’ve been cageside for more live fights than almost anyone on the planet. Without question, Chandler vs. Alvarez was the best MMA fight I’ve ever seen. I’m excited to be able to deliver this rematch to MMA fans. It’s been a long time coming and we’ve had to jump over a lot of hurdles to get this done, but from the day we announced our PPV I promised fans that this card was going to be the deepest we’ve ever done, and we are well on our way. This is just the start.”

One thought on “Eddie Alvarez re-signs with Bellator; to fight Michael Chandler for lightweight title on Pay-Per-View”