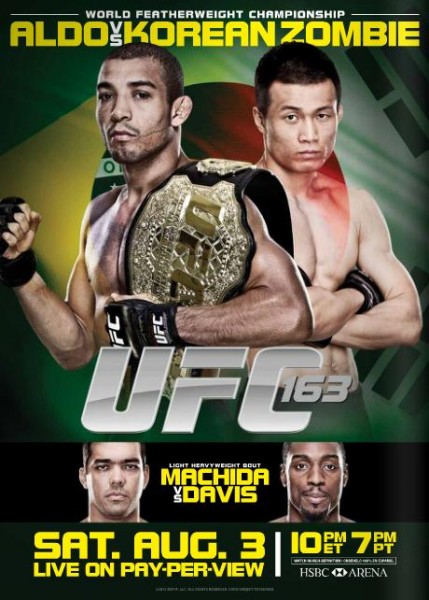 [ads1]
UFC Featherweight Champ Jose Aldo defends his title against The Korean Zombie. Top-ranked light heavyweight contender Lyoto Machida faces the once-beaten Phil Davis. Select members of the ProMMAnow.com staff have submitted their predictions for some of the standout fights taking place at UFC 163 in Brazil this weekend. Submit your own picks and share your thoughts.

JAN GAETJENS: Although McCall has yet to record a victory inside the Octagon, two of his last three outings have been against seemingly invincible Demetrious Johnson. McCall is a legitimate contender in the division; consider this matchup against the relatively unknown Santos his opportunity at a return to form on his journey back up the ladder. McCall by decision

JACK BRATCHER: McCall travels into enemy territory to fight a guy who has quite a bit more experience against a bit lower level competition. Santos does seem to pack more power than McCall though with 12 of his 27 wins coming by knockout as compared to McCall with only 4 wins by (T)KO stoppage. When McCall is on his game he looks nearly unbeatable. But we’ve not seen that McCall since moving to the UFC and his personal problems have probably had a lot to do with that. From what I can tell, he appears to be back on track, but will he be able to pull it together in Brazil? He’s lost his last two via decision and Santos is coming off a KO loss against Iuri Alcantara back in May. I think this fight is a lot closer than some might think, but I’m going to give McCall one more shot before I start picking against him, in the hopes that he is back on track. McCall via decision.

JAN GAETJENS: Nunes’ size advantage should be enough to earn her the win in what should be a fast-paced physical matchup. Nunes by decision

JACK BRATCHER: This should be a fun fight. Both girls have six wins by way of knockout. Gaff seems to be better on the ground so if it goes there Nunes could have some trouble. Nunes is coming off a decision loss to Sarah D’Alelio in Invicta, whereas Gaff is coming off a KO loss to Sara McMann in her UFC debut in April. Nunes has done better against tougher opponents so I’m going with Nunes via decision.

JAN GAETJENS: For those that complain about Brazilian fighters getting homefield advantage, here’s all the justification you need to keep complaining. Magalhaes by (T)KO

JACK BRATCHER: I think Vinny is the better all-around fighter. He just went the distance with Phil Davis, dropping a decision. Perosh is coming off a KO loss to Ryan Jimmo. Perosh’s best work is on the ground and Vinny will have no trouble on the ground, and I think his striking continues to improve and we might even see another head kick knockout. Vinny wins by knockout.

JAN GAETJENS: Watson is vulnerable on the mat as it is, no less against a grappling stud like Leites. Early takedowns and persistent submission chaining should open and opportunity for the BJJ blackbelt to end the night early for Watson. Leites by submission

JACK BRATCHER: If this fight goes to the ground, that’s Leites’ world, but I think “Kong” is going to knock him out. Watson by (T)KO.

JAN GAETJENS: This is going to depend wholly on whether or not Davis is relentless enough in pursuit of the takedown to get a hold of Machida, who will, in classic Machida fashion, keep as much distance as possible and use his unorthodox movement to frustrate the wrestler Davis. If Davis can avoid the mistake of being bated into giving Machida openings to counterstrike, then it’s game over. Davis by decision

JACK BRATCHER: I would not want to fight Machida in Brazil. I would not want to fight him anywhere, but especially in Brazil. Phil’s only loss has come to Rashad Evans, however, he has never faced anyone like Machida. Wrestlers have a hard time getting him down because he is so aware of and uses distance so well. On the feet this is Machida’s fight. Machida by knockout. Boom.

JAN GAETJENS: That ‘Twister’ was absolutely sick, and The Korean Zombie gives Aldo an opponent who won’t be afraid to put on a show in pursuit of the title; however, Aldo is one of the few opponents at 145 who can find Jung’s extremely elusive off switch. Jung has proven time and time again that he can absorb damage like a sponge, but Aldo’s ability to keep constant pressure on his opponents will prove to be too much. Aldo by (T)KO

JACK BRATCHER: If Zombie could drag this into the championship rounds he might stand a chance. But it won’t go that far. Aldo will finish him within the first three rounds via TKO.
[ads2]