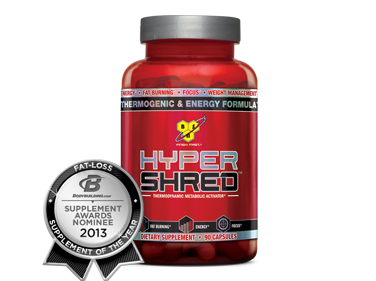 The next stop on Furby’s World Tour of Supplements takes us to supplement powerhouse BSN. Given my own commitments to a new baby, I chose to put my workouts to the side. However, to make sure that BSN products got a thorough review, I was able to give some of them to my good friend Cody Perry.

Cody is an experienced weightlifter and has competed in and won various Powerlifting competitions. He received a bachelor’s degree in Exercise Science from Transylvania University. After that, he taught weight training at the University of Kentucky where he received his Master’s Degree in Sport Management.

Cody’s first review brings us his thoughts on BSN Hyper Shred, a BSN product that was recently nominated for Bodybuilding.com’s Fat Loss Supplement of the Year.

I recently used Hyper Shred from BSN for a period of 2 weeks straight. I lifted weights daily and consumed a normal diet supporting weightlifting during this 2 week period. BSN makes the following statement on its website concerning Hyper Shred:

HYPER SHRED™ ingredients when used as directed, at maximum dosage, over time, combined with a healthy diet and regular exercise are designed to support:

I took Hyper Shred exactly as directed by the company, having one pill 30 minutes before breakfast and then another pill 30 minutes before my lunch 4-5 hours later. It definitely energized me for my workouts. The 180mg of caffeine probably played the biggest role in that energy. However, despite normal warnings on limits placed on caffeine use I did not find any harsh interactions with my pre-workout mix I was taking at that time.

Because I have taken the same pre-workout several cycles over the last 2 years and I know the normal level of focus that the pre-workout gives me I was able to make an evaluation on whether or not I received any extra “Focus” or not. I would say that I did not gain any extra focus from this pill despite its claims.

I did not experience any weight loss or gain during this two week period of time. I believe a longer six week trial would need to be conducted with more precise measurements made in overall body composition to determine its full effects on fat burning and weight management. However, I would make an educated guess based on my increased energy levels and since I did not gain any weight during this time it was in fact increasing my metabolism and I was burning more calories in general.

It seems as if it is an effective weight management supplement if used correctly in conjunction with diet and exercise as BSN claims. Despite my general mistrust of supplement companies I would state that BSN may be one of the better companies out there as they have won more awards over the last six years than any other sports nutrition company during that time period. They’ve also grown into one of the largest sports supplement companies in the world in a mere ten years in existence, built on the reliability of the quality of their products.

Overall, I would recommend Hyper Shred to someone asking me of its efficacy.

Comparative cost: A 90 pill bottle sells for $59.99 on BSN’s website.  This breaks down into $10 per week in cost.  Compared to the best thermogenic I have used in the past, this is the exact same cost.  It would be a good product to use in an offcycle with a different thermogenic.

Effectiveness:  The energy is definitely there and I believe a long term trial would result in fat burning and aid users in weight management once they have reached their ideal weight.  However, most weightlifters are using pre-workouts that provide a focus factor and this product does not noticeably contribute to that.  A more fair, longer, examination would utilize this product without another product that enhances focus, but I chose not to temporarily continue use of my pre-workout and I highly doubt any other weightlifter worth their salt would either.

Long Term Product Sustainability: Hyper Shred has some ingredients in it that are from the old school of thought when it comes to meatbolic boosters.  None of its ingredients lead me to suspect it is a product that you could become dependent upon; no more than a regular caffeine addiction, which is easily overcome.  I would cycle off this product after the bottle is complete and use another thermogenic for a different cycle.

Negative Side Effects: I experienced no upset stomach symptoms and no feelings of nervousness while taking this product.  Again, overall, I would recommend this product.