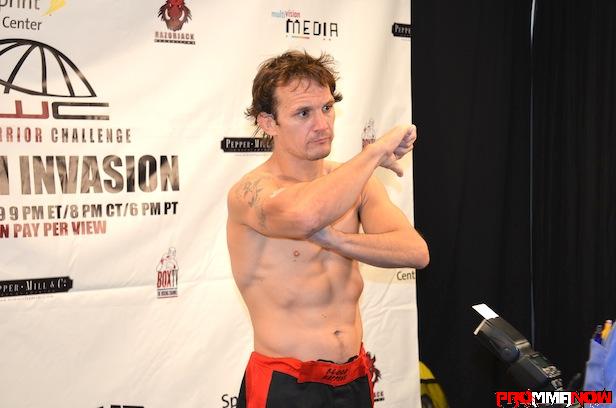 [ads1]
When Drew Fickett first signed with the UFC in 2005 he had a record of 24-2 and had already racked up wins over the likes of Edwin Dewees, Dennis Hallman, Carlo Prater and Kenny Florian.

Fickett would go on to win and lose two more times inside the UFC Octagon (going 4-3) before being let go in April 2007 following a unanimous decision win over Keita Nakamura at UFC Fight Night 9. That’s right, Fickett was released on a win, not because of his performance in the Octagon, but because of a certain incident outside the cage involving a bouncer and booze.

Fickett’s relationship with booze would continue on and off for the next several years. A brief look at his record will give you a good indication when he was on and off the wagon. I met Drew recently at the Global Warrior Challenge event in Kansas City and shot some footage of him at the open workouts in which he talked about his sobriety and rejuvenation. Then when I saw his performance inside the cage against the highly-touted Andre Winner, I could tell he was a different man — and so could anyone else who saw that fight.

Drew has been sober for over a year now and on a recent edition of Pro MMA Now Radio, he opened up about what this journey to sobriety has been like.

“It was definitely the hardest fight of my life, hands down. I can’t even compare MMA or the sport of MMA or most average dealings in life with anything an alcoholic or addict has to deal with. It’s complete misery and it just puts you in the darkest most hopeless depression and places you can’t possibly imagine. I can basically relate it to feelings I felt when my mother passed away when I was in high school.”

Drew started his pro MMA career in 1999 and during that whole time he never suffered back-to-back losses until 2008. He explained how alcohol started affecting his fighting.

“I got to the point where I would do so awesome in life and in fighting and take like four steps forward, and then I’d always end up taking like 10 steps backwards. At first I remember watching Chris Leben on The Ultimate Fighter and he was drunk and funny, and I was like young and impressionable and was like that’s so cool you can’t get drunk and do all that stuff and fight, that’s really cool and wow. And then when I started drinking… I mean we were always crazy when we were drunk, but I kind of started relating getting drunk and fighting and being part of the fight team and drunk — I started thinking that was okay. Kind of my first impressions of that being okay were because of that show. Then I started really bringing my drinking into fighting.”

“It didn’t become a problem until like about 10 years into my drinking and then it was like you’d be showing up to the liquor store at 6 a.m. You’re having to drink at like every function to have fun. Like you just can’t have fun, like you have to be everywhere drunk, morning, noon and night. If you’re not drinking it’s not fun and you can’t be yourself and you start to depend on it. And it’s very very scary. When you start to depend on alcohol it’s a horrible thing. The devil truly comes into your life.”

Anyone who is familiar with addiction or alcoholism knows that a person generally has to hit “rock bottom” before they truly make up their mind to want to change and take the necessary steps to make that happen. Drew’s rock bottom was pretty severe to say the least.

“And I truly hit what you would say is rock bottom. I have a fiancé and we’re about to get married. She’s about to get her degree as a doctor in psychology, and she won’t put up with my drinking. And there came a point in our relationship where she finally just left me. And she was kind of like my rock helping me try to get sober and I just kept failing, so I was left to my own devices. So I was in my apartment getting wasted and I have this friend Sergeant Steen who’s this homeless guy and I had him move in with me. Great idea. So we’re partying the whole week together, we’re drinking. He thinks it’s great and then I just keep drinking and it gets to the point I wake up and there’s there’s blood and there’s shit and there’s piss and there’s vomit all over the place. Well, it’s all me. It got so bad that my homeless buddy Sergeant Steen had to leave cause I was too out of control.”

“There were holes all over the wall, there was glass everywhere. Well, I ended up with a cut on my hand from punching some piece of glass or something. The worst physical pain from drinking is going through alcohol withdrawals. And it’s not just feeling hung over. I mean you feel like you’re about to have a seizure any second, you’re seized up on the floor all night clinching your teeth trying not to go into a seizure for like hours and hours. So once that passed I had some friends that really came and helped me out during that time. Once that passed I noticed my hand was getting bigger and I went to the hospital a couple days late. My hand was huge and swollen and they were like talking about amputating my freakin hand and I was like well, that’s not going to make me a very good piano player now is it? Fighting, I think I could probably still choke somebody with one hand. But playing the piano, probably not.”

“So I started freaking out man, and thank God I prayed and Jesus just saved me and saved my hand. He told me hey man you just have to let go and embrace God and get out of this town. So as soon as I got out of the hospital I flew to Florida in Ft. Lauderdale and I checked myself into a really janky rehab, but it was a step in the right direction. I actually fought some Brazilian in a Missouri show with my hand three times the size it should be, just healing up from staph. I don’t know how the doctor cleared me but he did. I can’t remember the guy’s name. But yeah that’s when I came to the point where I said enough is enough and I went to Florida and I got my life straight and I found Jesus Christ and now I’m as great as I could ever be. I can’t even remember the person I was. I can’t even remember or believe these stories I hear of myself are even true. It’s crazy. God is good man.”

Drew talked about being able to use what he’s been through to help others.

“I’m grateful. I’m grateful to be alive. I’m grateful I had that experience. I wouldn’t change it for the world because like you said, I have an ability that will always be with me. I’ll be able to understand the alcoholic and the addict’s life and I will be able to help people change their own lives.”

Although Drew lost the decision to Andre Winner at Global Warrior Challenge last month, he explained why he was pleased with his performance.

“I can honestly say it was one of the best feelings in the world. I definitely think Andre did enough to win. I definitely thought I did enough to win. But honestly, win or lose that fight I’d still feel the same. I’d still feel like it was a victory in my champion’s heart, because it’s not even about what other people thought. It was about what me and Andre did that night and it was a very special fight. That was probably the best fight of my life. And I’m just getting better which is awesome, but I finally put everything together. I have a genius boxing coach that obviously he’s been pretty pissed off at me for not listening and training the right way the last few fights where I’m just going in there and getting knocked out when I’m high or freakin drunk or whatever.”

“It was nice to put everything together and it was just a beautiful fun fight. It was like a glorified sparring session for me and I had a blast. I loved fighting Andre. He was purely a great technician. His striking was really at a high level and me having this newfound passion for the striking game, it was cool with me somewhat at like the beginning level of striking was able to get in there with my coach Pedro Martinez’s defense and shields and boxing style that he developed. Andre couldn’t really hurt me. I couldn’t land as many strikes as Andre could cause I’m not quite at that level yet, but he couldn’t really hurt me and I dished out some of my own. It was a great fight, and like you said I stood in there for three rounds and I definitely hold my head up high cause if I fight every fight like that for the rest of my life, and I lose, cool man. I can live with that.”

At only 33 years of age, Drew talked about his future in fighting and what he sees for himself moving forward.

“I’m just getting started man. I just look at it like that was the first fight of my career, I had a good performance and I’m 0-1. Records are more for other people. They’re not for me. I’m not about the result, I’m about the journey. If I keep looking back at my record what good’s that going to do me? What good’s that going to do anyone? I mean it might help your sportswriter talk some trash or something, but let them talk. Let them feel whatever they’re going to feel about my record. I don’t care. I don’t feel anything about my record. I look at my fights as great experiences and I move on. That’s it.”

Even through all his struggles, Drew has always remained active, fighting three, four or five times a year. I remember watching him at the open workouts. He was in great shape, he was doing burpees, shadow-boxing, hitting mitts and I was thinking just how much he’d been through and he’s still here working his ass off. He never quit. He explained how just being involved with fighting and martial arts and sticking with it has made a difference.

“I can honestly say fighting is what saved my life. If it weren’t for fighting I’m very certain I wouldn’t be here. Fighting and Jesus Christ, those are two things I hold in high esteem.”

You can check out the full audio version of this interview here: Pro MMA Now Radio welcomes Drew Fickett. Follow Drew on Twitter at @DrewFickett.