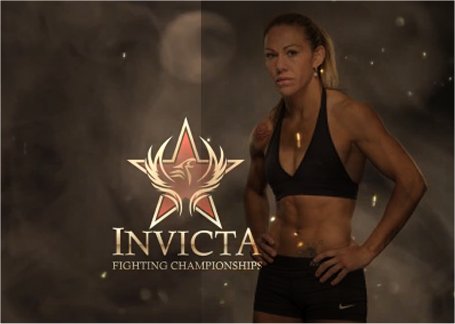 Cris “Cyborg” is once again a champion.

“Cyborg” systematically dismantled Marloes Coenen, punishing Coenen with an unrelenting attack that resulted in a TKO stoppage at 4:02 of the fourth round. The dominating victory earned “Cyborg” the inaugural Invicta FC featherweight championship.

After an early exchange, Coenen immediately shot in for a takedown which was shrugged off by Santos. Santos advanced, landing with heavy strikes as she worked her way inside. Santos used a bodylock to take the fight to the mat, putting Coenen on her back. “Cyborg” postured and landed a flurry of powerful right hands from the top. Santos finally retreated, letting Coenen back to her feet. Coenen fired off a stinging leg kick but it was the counter right hand of “Cyborg” that would again take the fight to the mat as Coenen dropped from the punch. Again, Santos let Coenen back to her feet to resume her attack on the feet. “Cyborg” landed at will during a late exchange, before slamming Coenen to the mat to finish off a dominating first round.

Coenen went to work with kicks but again was caught with right hand counters from Santos. Coenen shot for another takedown but ended up on the bottom once again. After a retart, Santos again secured a powerful slam, putting Coenen back on the mat. “Cyborg” landed in side control, then punished Coenen with elbows from the top. After another restart, “Cyborg” hurt Coenen with a body shot, and then followed her to the mat, continuing to land big shots as she seized control of the bout.

Santos continued to dominate wherever the fight took place as she repeatedly slammed Coenen to the mat. “Cyborg” pounded Coenen with strikes from the top as Coenen covered up to avoid the punishment. Santos stayed content to step away and resume the battle on the feet. Santos inflicted damage in the clinch as well, landing big knees, and then poured on a barrage of staggering shots as Coenen leaned on the cage. Amazingly, Coenen survived to see the championship rounds.

“Cyborg” wasted little time resuming her attack as she flurried with a punishing attack that included knees in the clinch and overhand rights. Santos was caught with an illegal upkick that stopped the fight momentarily. When it resumed, so did Santos, dropping Coenen with a monster right hand. Santos continued to blast Coenen with strikes from the top while the referee looked on. The elbows came next. Santos dropped repeated elbows and strikes that finally forced Big John McCarthy to step in and stop the onslaught.

The dominating victory earns “Cyborg” (12-1 MMA, 2-0 IFC) yet another title as she is now the Invicta FC featherweight champion.