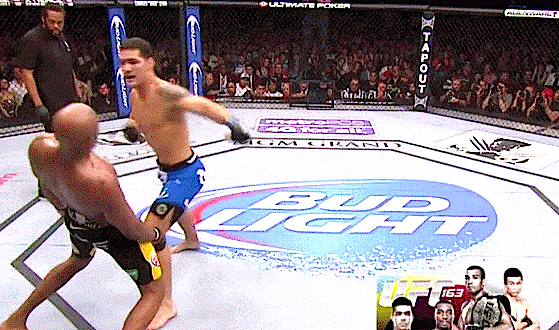 Chris Weidman came out strong in round one against Anderson Silva in the UFC 162 main event Saturday night in Las Vegas. Like Chael Sonnen before him Weidman put Silva on his back early in round one, controlled him and landed ground and pound.

Before the first round was over Silva got back to his feet and started toying with Weidman, dancing and showboating like he has done against so many opponents before. He tries to make them look stupid and most of the time he succeeds.

As round two began it was the same thing, except Silva was able to stuff the takedown and went right back to showboating. Hands by his sides he dodged and danced and taunted the 29-year-old 9-0 Weidman.

Between rounds Weidman’s coach Ray Longo told him to go “Punch a hole through his f*cking chest!” Instead, Weidman aimed for Silva’s head and caught the champion with his hands down. He dropped Silva to the canvas with a big left hook then finished him off, knocking the long-reigning champion unconscious.

Anderson Silva held the UFC middleweight title for more than six years. It’s hard to believe all that Silva has done inside the Octagon. He truly is the greatest fighter of all time, but he became a victim of his own success. This might be the best thing that could have happened to him.

Read our play-by-play of the fight.