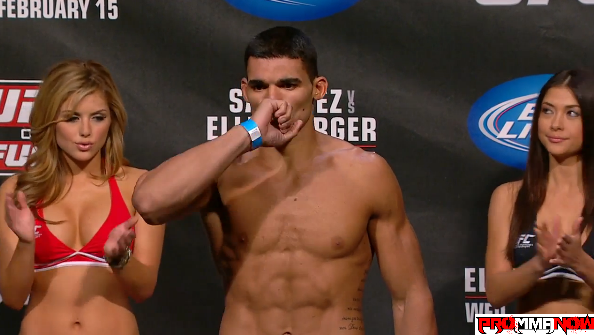 UFC on FUEL TV 10 has lost one of it’s preliminary card matchups after Ronny Markes‘ (14-1) involvement in a car accident earlier today. He was scheduled to face Derek Brunson (10-2) at the event, but their fight has now been cancelled.

MMAFighting.com confirmed Markes injuries with UFC president Dana White, which included a concussion and injuries to his neck and back. As a result, Markes was considered unfit to fight, which means the event will now have 12 fights on Saturday night in Fortaleza, Brazil.

Mr White also confirmed that both fighters will receive their show money.

Derek Brunson was one of the fighters who made the transition over to the UFC from the now defunct Strikeforce promotion. The start of 2012 didn’t go well for Brunson as he dropped losses against Kendall Grove and Ronaldo Souza. However, in his UFC debut Derek bounced back into the win column, defeating Chris Leben via unanimous decision at UFC 155 in December 2012.

Ronny Markes is currently riding a seven fight winning streak, which includes victories over notable fighters such as Paulo Filho, Karlos Vemola and Aaron Simpson. His most recent fight was against Andrew Craig at UFC on FX 7 in January, where he won via unanimous decision. None of Markes injuries are considered to be serious, so hopefully he will make a speedy recovery.