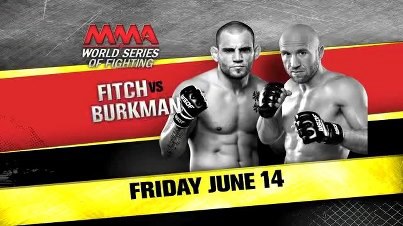 Ray Sefo and the cast of World Series of Fighting 3 participated in a media conference call earlier today to discuss the upcoming event that takes place on June 14th at the Hard Rock Hotel and Casino in Las Vegas. Jon Fitch, Josh Burkman, Jacob Volkmann and Lyle Beerbohm joined Sefo on the call.

Fitch discussed how even from early on he always felt with each fight in the UFC he was fighting for his job. He expressed his pleasure with WSOF and mentioned that it’s nice to have people working with him and not against him. He was clear he felt the UFC was looking for ways to get rid of him, talking about things he had heard they said in circles but never to him directly.

Josh Burkman spoke on his progression as a fighter and what has changed since his first meeting with Fitch. He complimented Fitch saying he was one of the best welterweights and he would get an opportunity to see where he was at in the division.

Volkmann gave his thoughts on what he would do with UFC fighter pay and contracts. He says that most fighters are just hanging on in between fights. Despite what his friends and family may say, Volkmann says he is a happy guy and has changed his nickname to “Dr. Feelgood”.

Sefo made it clear he was in no rush to throw championships out so early. He believes the winner of Burkman vs. Fitch definitely has earned a shot at a title. He also said that Tyson Griffin will be fighting in August and Nick Newell will either be on the August or September card.

Here is the conference call in its entirety.