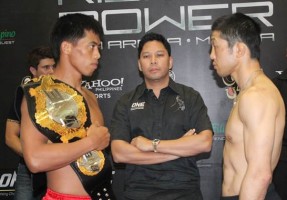 The ONE FC 9: RISE TO POWER event was the largest event in ONE FC history and 20,000 fans were treated to a night of unforgettable action as ONE FC kingpins battled inside the famed ONE FC cage.

ONE FC 9 was held Saturday at the Mall of Asia Arena in Pasay City, Philippines.

Honorio Banario was looking to defend his title for the first time in the main event against Koji Oishi, but Oishi landed a right hook in the second round and followed up with punches to become the new ONE FC featherweight champion.

The ONE FC:  Rise to Power results can be found below: