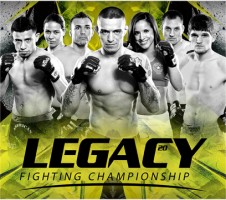 Legacy Fighting Champioships is live from the American Bank Center in Corpus Christi, Texas for their 20th event. The 45 year old Carlo Prater takes top billing in the main event. The UFC veteran meets Texan Carlos Diego Ferreira in a lightweight match up. Prater, from Brazil, has won only once in his last four outings but is coming off a submission win earlier this year.

The main card features five fights that are airing live on AXS TV. UFC and WEC veteran Damacio Page looks to get back in the win column but has undefeated Patrick Ybarra to get past. Flyweight Matt “Danger” Schnell returns to Legacy. The former reality TV star meets Elias Garcia to get the broadcast started.