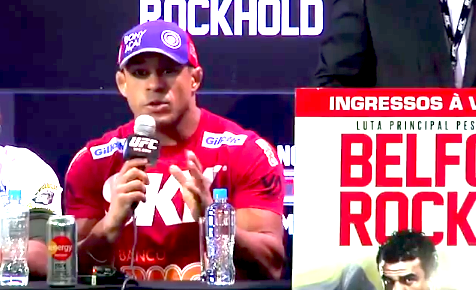 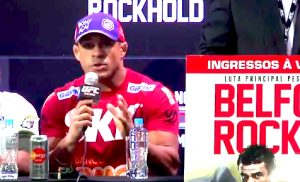 The man of the hour, 36-year-old veteran Vitor Belfort (23-10), who just got done knocking out his second straight top-10 middleweight in the last five months, has issued an apology for the way he reacted to questions about TRT (Testosterone Replacement Therapy) at the UFC on FX 8 post-fight press conference Saturday night.

“To all my fans and to all the reporters that was there on the after press conference I would like to ask for forgiveness the way I answer about TRT I RECOGNIZE THAT I ANWSER IN A IMMATURE WAY BUT WAS THE 10 th time that that reporter ask the same question. No excuse!! I made a WORNG call and I am here to ask for forgiveness God bless all you guys love to do what I do and I am keeping moving UP SEEKING GROW AS A MEN OF GOD AND AS A FIGHTER “DONT DOUT ME I WILL PROUVE U WORNG” PEACE”

Maybe you missed Belfort’s comments to MMAJunkie reporter John Morgan, who asked, “I know you hate it, I know you don’t want to hear about it, but it’s all anybody’s talking about. Joe Rogan even tweeted about it. I mean how frustrating is it every time you do something good people just want to ask you about testosterone and how much that’s playing in your life and can you just address that?”

The man Belfort knocked out with a devastating and spectacular spinning heel kick, Luke Rockhold, who had been very vocal about Belfort’s TRT use before the fight, defended Belfort saying, “TRT had nothing to do with that kick. It was good.”

Later in the press conference a Brazilian reporter questioned Belfort about comments he had made saying he was “better than ever”. The reporter wanted to know if he attributed his being “better than ever” to TRT use. Belfort replied, “Are you joking? You must be joking. Come on stop that.”

But the difference a few days can make, especially when there’s a slew of negative backlash from the media and fans. Morgan’s question was valid and so was the Brazilian reporter’s. If you’re a professional athlete, an MMA fighter in the sport’s premiere organization — an organization whose owner claims will one day be bigger than the NFL — you have to expect these questions.

Put yourself in Belfort’s position for a moment. He’d just fought, he just won in devastating fashion and one of the first things he’s asked is if it’s frustrating to know anytime something like this happens, people are going to bring up his use of TRT and how much it is playing a role in his success.