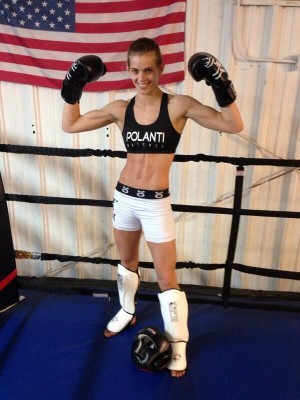 Jessamyn Duke‘s controversial knockout loss to Miriam Nakamoto at Invicta FC 5 on April 5 has been overturned to a No Contest by the Missouri Office of Athletics. Duke and her team appealed the loss based on the fact that she was grounded when hit with an illegal knee strike that resulted in referee “Big” John McCarthy stopping the fight 2:20 into the first round.

BluegrassMMA.com reports on the Missouri athletic commission’s decision to overturn the ruling:

“BluegrassMMA obtained a copy of the correspondence. In the letter from Tim Lueckenoff, Executive Director of the Missouri Office of Athletics, it states that the decision was based in part by statements from officials and contestants. Nakamoto stated after the fight she was not certain Duke’s knees were on the ground because of the height difference in the fighters and her head position during the fight. She also stated that Jessamyn continued to engage and grasp her following the first knee. This was confirmed by the video of the fight.”

Here’s a GIF of the finishing sequence and illegal knee Duke took from Nakamoto:

It’s interesting to note Nakamoto even received a “knockout of the night” bonus for the “win”. Guess that’s a wash. There was a bit of bad blood between these two so it’d be nice if they could get a rematch somewhere down the line.

The 26-year-old Duke is currently 2-0, 1 NC in her young pro career and is expected to participate on the upcoming season of The Ultimate Fighter season 18. It will mark the first season in the show’s history in which women will take part. UFC women’s bantamweight champ Ronda Rousey and No. 1 contender Cat Zingano will serve as coaches.

Listen to our Invicta FC 5 post-fight interview with Jessamyn Duke on Pro MMA Now Radio just two days after her fight with Nakamoto as she shares her thoughts on the illegal knee and her camp’s decision to protest the knockout.