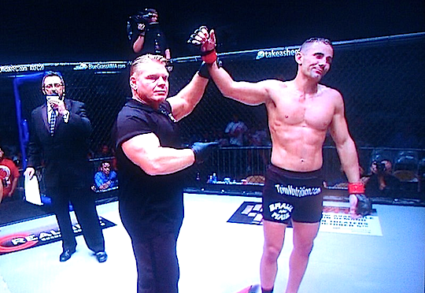 It’s time to fire up the Blog machine again, just in time for my next fight for the XFC June 14th in Tampa, Florida. The new title of my blog “My Stream of Consciousness”, is a very calculated attempt to inspire me to write on a more regular basis.

Sometimes I feel like the formal structure of writing itself deters me from sitting in front of the computer to write. So I’m giving everyone a fair warning that my blogs from now on will be written in Stream of Consciousness.

Before you send me a private message about how bad my paragraph structure is and that my grammar sucks…. you know what, go ahead and write me I don’t really care. When you have more than a few MMA websites asking you to write a blog then I still won’t give a shit what you have to say.

So I was talking to some young fighters today and they were asking me if I had any connections for getting fights. By the way I need to write a short manual on that and sell it. But in all honesty I think it’s getting harder and harder for young fighters to get fights.

Unless you live in a area of the country that has four or five decent local shows staying on a consistent fighting schedule it’s getting tough. I’m happy that promoters are figuring out a way to make some money off of their shows by increasing ticket sales and keeping costs down using nothing but local fighters.

On the flip-side guys in certain parts of the country are sitting inactive for long stretches. I think what a lot of these guys don’t understand is that in boxing, or even with the absolute top prospects in MMA, management teams are willing to pay for travel and other expenses in the hopes they produce a world champion. Recovering their initial investment and making huge money on the back end of the deal.

You don’t see this as much in MMA because the percentage of fighters that make six figures per championship fight is substantially less than in boxing. Which brings me to the portion of the blog where I insert a personal story; my first fight in Costa Rica I was paid $300/$300 but I had to buy a $300 dollar plane ticket. So if I would have lost I would have broken even.

I forgot about the cost to drive from Miami to Tampa, so I actually lost money.

I think the worst was paying for a 400$ plane ticket to Kansas, fighting a three round war with Dustin Blake who was 6-1 at the time and then my 1400$ paycheck bouncing and never getting paid.

Point being if you really want to fight you just got to make it happen, pay your dues and make an investment in yourself if you think you can be a champion.

I want to thank promotions like the XFC and CFA that are paying guys with my type of resume good money so that we can focus more of our time on training. Also Brawl and Maul who has been with me from day one helping me financially as a sponsor and more importantly as people I feel I could always go to if I needed help with ANYTHING.

Tonight that’s all I got but moving forward I’m going to try to give you guys the scoop on my life and what it looks like these next six weeks leading up to XFC 24 live on AXStv. This will consist of a small intro into how I ended up in Savannah, Ga., my living situation, training, bartending three nights a week, my relations with women and the fight. Though I’m going to be 100-percent honest about everything I will leave out names to spare myself from tongue lashings.

Shah Bobonis is a professional mixed martial arts fighter from Miami, now living in Savannah, Ga. Shah returns to action June 14 at XFC 24 when he faces Jason Hicks at featherweight. Follow Shah on Twitter at @shahbobonis and on Facebook at Facebook.com/shah.bobonis.