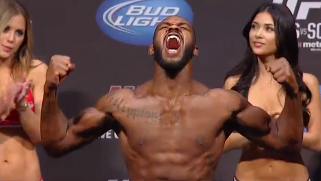 [ads1]The UFC 159: Jones vs. Sonnen event took place on Saturday night from the Prudential Center in Newark, New Jersey. Jon Jones dismantled Chael Sonnen via TKO in the first round to defend his UFC light heavyweight title while suffering a compound fracture of one of his toes in the process.

The co-main event saw Michael Bisping defeat Alan Belcher via technical decision. Also, Roy Nelson landed another one of his patented right hands to defeat Cheick Kongo via first round TKO, his fourth in a row. Check out the full fight video highlights below: