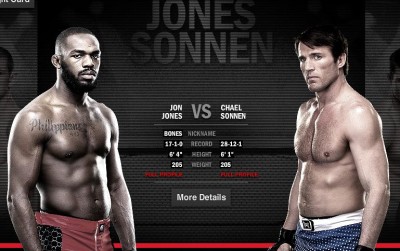 UFC President Dana White and company decided it was a fight the fans wanted to see, there wasn’t a clear cut number one contender for Jones to fight and here we are.

Make no mistake about it, Chael Sonnen is a huge underdog in this fight, and will likely lose this fight as the betting guru’s suggest.

However, Sonnen has three very strong attributes that could possibly take him to a win over Jon Jones:

Almost all of the fighters Jon Jones has faced in the UFC have been counterstrikers. Fighters that allowed Jones to dictate the pace of the fight, use his length to keep them at bay, or his wrestling to take them down and pound them out. Sonnen has always been a fighter that comes forward and puts pressure on his opponents. Jones doesn’t fight well moving backwards(not many fighters do), just see the first round of his fight with Lyoto Machida.

Sonnen has a very good chin as he has only been legitimately stopped via TKO twice in his career and never really knocked out. He’s not afraid to take punishment to close the distance and put fighters on their backs, not to mention Jones lacks big power in his punches and kicks.

Sonnen will arguably be the best wrestler that Jones has faced in MMA. The threat of a takedown is something that will somewhat limit Jones and his arsenal of strikes. It could also help Sonnen somewhat negate the extensive reach advantage that Jones will have over him.

Sonnen will need to be in excellent shape to pull off this upset. He is usually well conditioned, but I mean he’ll need to be in phenomenal shape to win. He will have to fight at a torrid pace, keeping the pressure on Jones with strikes and takedown attempts. He’ll need to keep Jones with his back against the cage and make this an ugly fight, keep Jones uncomfortable while avoiding the trips that Jones likes to use for takedowns from close range. Sonnen on his back is a deathwish as Jones throws elbows from the top position like nobody else in the history of MMA.

If he’s able to get Jones down to the ground, hopefully he has shored up his suspect submission defense. We haven’t seen much of Jones off his back, but I’m willing to bet he can catch Sonnen in a submission due to his long limbs if Sonnen isn’t careful. Also, eight of Sonnen’s 12 losses have come via submission.

I expect Sonnen to make a fight of it against Jones. He’ll probably do better than most people will give him credit for because he’s a very tough fighter. However, if he accomplishes the tasks above he certainly has a shot at pulling off the huge upset.

One thought on “UFC 159 preview: How Chael Sonnen can beat Jon Jones”