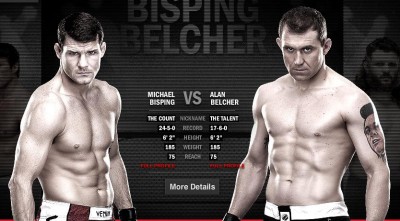 However, the co-main event will feature a middleweight grudge match between top 10 middleweight Michael Bisping and the always tough Alan Belcher. Belcher has been asking for this fight for quite a while, so it’ll be interesting to see if he can rise to the occasion.

Alan Belcher (18-7) comes into this bout off a unanimous decision loss against Yushin Okami at UFC 155 in December 2012. It was his second loss to Okami in his career and snapped a four fight winning streak. Belcher has won nine fights via TKO/KO and seven fights via submission. He’s a very well rounded fighter, but his biggest weakness is his takedown defense.

Michael Bisping (23-5) comes into this bout off a KO loss against Vitor Belfort in January 2013. Bisping has lost two of his last three bouts after rattling off four consecutive wins between 2010 and 2011. He has won 14 fights via TKO/KO and four fights via submission. Bisping is the epitome of well rounded with his biggest problem being his lacks real power in his strikes and relies on volume punching to do damage.

Bisping is the betting favorite going into this bout, but it’s a dangerous bout for him.

This fight will all come down game planning and execution. Both fighters are evenly matched with Belcher has the edge in punching and kicking power. However, Bisping is probably the better wrestling and slightly quicker all around with his movement.

Belcher is the more accurate striker with Bisping landing more punches per fight according to Fightmetric. Belcher’s takedown defense isn’t terrible, defending them 55% of the time.

I think Bisping will try to fight smart and use lots of movement on the feet while using opportune takedowns to seal the deal on close scoring rounds. Belcher will likely be throwing heat with every strike due to his dislike for Bisping which could work against him.

I think Bisping takes this fight via decision, but if it doesn’t make it to the judges I expect Belcher’s hand to be raised in a mild upset.