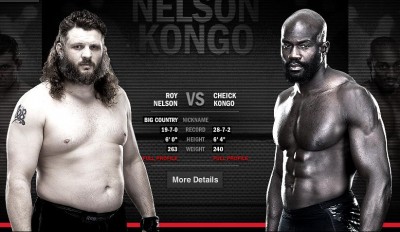 However, the main card will feature a heavyweight fight between top 1o heavyweight Roy Nelson and UFC veteran Cheick Kongo. Let’s see how this one breaks down.

Roy Nelson (18-7) comes into this fight off back-to-back first round KO wins, including a knockout of Matt Mitrione at the TUF 16 Finale in December. Nelson has won 11 fights via TKO/KO and five fights via submission. Nelson has absolute granite in his chin and dynamite in his right hand while also being well versed in submissions on the ground.

Cheick Kongo (18-7-2) comes into this fight off a lackluster decision win over Shawn Jordan at UFC 149 in July 2012. Kongo came into MMA primarily as a kickboxer, but has improved his wrestling a bit since then while exhibiting excellent ground and pound technique at times. He has won 10 fights via TKO and three fights via submission. His chin has been somewhat questionable in the past, and lately has seemed to shy away from many striking exchanges while choosing to fight in the clinch from close range.

Nelson is the betting favorite going into this fight and should be as he has more tools at his disposal.

Nelson has stated that he finally feels as though he’s coming into his own as a striker, and the results of his latest fights serve as proof. He’s willing to eat one of his opponents strikes to get his offense going which works for him since he has such a great chin. I expect him to try to close the distance and land that big overhand right on Kongo since Kongo will enjoy a huge reach advantage. He may attempt to take Kongo down since he’s more skilled on the ground, but that probably depends on how much confidence he has in his conditioning going into the fight. If he’s worried about gassing, he’ll probably avoid many takedown attempts since he could expend a lot of energy trying to take Kongo down.

Kongo will likely look to keep his distance and strike from range, or as he’s done lately, choose to clinch with Nelson and try to punish him while against the fence. He’ll be significantly taller than Nelson and may be able to do some damage in that position. It would also limit Nelson’s offensive output and negate the huge overhand right for the most part.

I think Nelson takes this fight. He is usually fairly aggressive in his approach and Kongo tends to like to counter-strike against heavy hitters like Nelson. Nelson either knocks Kongo out or wins a decision.