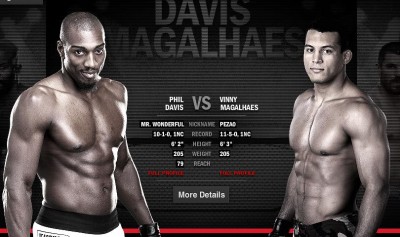 However, the main card will feature a light heavyweight fight between top 10 light heavyweight Phil Davis and TUF 8 runner-up Vinny Magalhaes. Magalhaes has trashed talked himself into this fight, so let’s see how this one breaks down.

Magalhaes (10-5, 1NC) comes into this fight riding a six fight winning streak, including a first round submission win against Igor Pokrajac in his last outing. Magalhaes has won eight fights via submission and two fights via TKO/KO. He has improved quite a bit since his days on The Ultimate Fighter, but will face his most difficult test in Phil Davis on Saturday.

Davis (10-1, 1NC) comes into this fight off a first round submission win over Wagner Prado at UFC 153. Davis has won four fights via submission and two fights via TKO/KO. He was an excellent college wrestler who has transferred a good bit of that into MMA. It’ll be interesting to see if he’ll take Magalhaes down and go against a world class submission ace.

Both fighters can strike but still rely heavily on their specialties in wrestling(Davis) and jiu-jitsu(Magalhaes). That kind of this fight that old school feel from the early days.

The smart thing for Davis to do is to use his wrestling in reverse and keep the fight standing. He is the more accurate striker and will enjoy a significant reach advantage. Also, he has very good takedown defense, so the only way Magalhaes gets this fight to the ground is by pulling guard. If Magalhaes does that Davis should look to get back to his feet immediately.

Magalhaes is betting that he can strike well enough to force Davis into taking him to the ground. He has improved his striking over the years, but Davis is beginning to get more comfortable on his feet as well.

We might have an sloppy kickboxing match on our hands here folks. I like Davis in this fight. I think he’s versed enough in submission defense to be OK on the ground for short periods of time. I ultimately see this fight being sort of lackluster as it’s a lose-lose fight for Davis. He’ll probably fight the smart fight to win a decision.