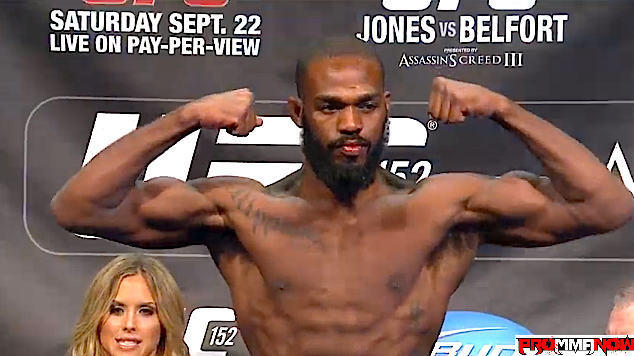 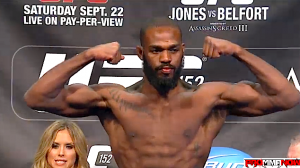 The UFC 159: Jones vs. Sonnen event is set to take place on Saturday, April 27, from the Prudential Center in Newark, New Jersey. The event will be headlined by the UFC light heavyweight title fight between champion Jon Jones and challenger Chael Sonnen.

That’s the real question. There’s little doubt that Jon Jones will beat Chael Sonnen, but will people be willing to shell out the money to watch it? Sonnen was blasted in his last fight as a middleweight against Anderson Silva. He didn’t earn the shot at the UFC light heavyweight champion. The time as coaches on the last season of “The Ultimate Fighter” did very little to promote the fight as both guys seemed to get along with one another just fine. All of the PPV events in which Jon Jones was in the main event have done at least 450,000 PPV buys. Sonnen is a PPV draw, but his over the top promotion of fights may be falling on deaf ears nowadays. Also, the co-main event features two fighters that are coming off losses in their last fights. There just isn’t a nice supporting cast on this card that could potentially help PPV numbers. So the final numbers on this show will tell us two things. Jon Jones can carry an entire card by himself, or Chael Sonnen is one of the best promoters in the game whether he wins or loses his fights.

Will Sara McMann emerge as a title contender with a win over Sheila Gaff?

This event will mark the third women’s MMA fight in the UFC when Olympian Sara McMann makes her UFC debut against Sheila Gaff. McMann (6-0) is undefeated while Gaff is (10-4-1) and has won three consecutive fights since losing three in a row. The UFC women’s bantamweight division is still relatively thin since there are still plenty of women waiting to make their UFC debut. McMann is thought to have the pedigree that could give UFC women’s champion Ronda Rousey some problems due to her wrestling background. However, she’ll have to get past Gaff in her debut and avoid taking an L in her debut the way Miesha Tate did last week.

Where will Roy Nelson go with a knockout win over Cheick Kongo?

Nelson has won back-to-back fights via KO. He’s thought to be one of the better heavyweights in the game, but hasn’t beaten anyone of note in his last two fights. Kongo is a solid heavyweight fighter, but is pretty one dimensional and will not do much in regards to moving Nelson up the heavyweight ladder. Maybe we could see a Nelson vs. Daniel Cormier fight if Cormier decides to stay at heavyweight for now? I’m not giving Kongo much of a chance here because Nelson has a granite chin, while Kongo doesn’t, and Nelson has huge KO power.

Can Alan Belcher pull off the upset over Michael Bisping?

These two have been going at it for a while now. They genuinely don’t like each other and it should be a good fight on paper. Both fighters are well rounded with Belcher having the edge in power, and Bisping probably being the better overall wrestler of the two(including takedown defense). If the fight is fought on the feet it could be anybody’s fight as Belcher has very good striking and is probably more of a threat with both punches and kicks. It’s a fight that neither can really afford to lose and remain among the upper tier of middleweights in the UFC.

Which lightweight prospect will come out victorious between Rustam Khabilov and Yancy Medeiros?

The lightweight division is arguably one of the deepest in MMA regarding talent. These two fighters are rising prospects to keep an eye on. Khabilov made a huge splash in his UFC debut in December when he tossed TUF alum Vinc Pichel around like a rag doll with suplexes. Medeiros (9-0) is a Strikeforce veteran who has finished seven of his nine opponents. The winner of this fight will be someone to keep an eye on moving forward.