[ads1]The UFC lightweight champion Ben Henderson successfully defended his title on Saturday night with a split decision win over Gilbert Melendez. As usual, there was some controversy in the decision, I mean what else is new with a Ben Henderson fight right?

I’d have to say that most people I talked to or read online thought it was a very close fight that could have gone either way. Personally, I scored the fight for Ben Henderson with him winning rounds two, three, and four. Our very own Jack Bratcher scored the fight the same way for Henderson. If you want to use PRIDE rules and judge the bout overall, I thought Henderson won it even more decisively that way, and the stats from Fightmetric support that as well. Check it out below: 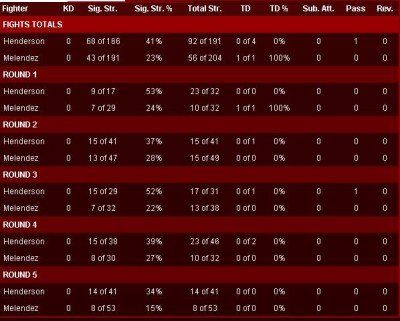 Henderson landed almost double the amount of strikes when compared to Melendez overall. He also landed more strikes in EVERY round except round two which was virtually even, but Henderson did land two more significant strikes in round two. It seems as though everyone is up in arms about the final round(which I gave to Melendez), but it looks like Henderson landed more strikes in that round as well. I gave the round to Melendez because he was the busier fighter and Henderson seemed to coast for the final minute without much activity offensively.

All the talk about Melendez being robbed of a decision win is ludicrous. It was definitely a close fight and the numbers support that statement. The fact of the matter is he didn’t do enough to win the fight, and that’s why Ben Henderson is still the UFC lightweight champion.