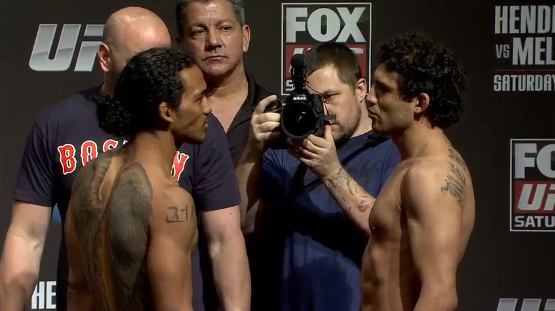 The highly anticipated main event that would determine who is the best lightweight on the planet, did not disappoint as UFC champion Benson Henderson and Gilbert Melendez engaged in a five-round battle of attrition that saw the champion get the nod on the cards by way of split decision with scores of 47-48, 48-47, and 48-47.

Gilbert Melendez started the bout strong, using his jab to measure the champion, before following up with his stinging inside leg kick. Henderson flashed his jab but didn’t let his hands go early, but did implement his patented kick game as the round wore on. Melendez managed to catch a number of the kicks, putting Henderson on his back on one occasion. Melendez could not keep the champion grounded but did damage inside with his left hook once back on the feet. Henderson looked to clinch but Melendez out-muscled him inside, thwarting any and all takedown attempts. Melendez continued to score with his combinations as time ran out on the first round.

Melendez went right back to his jab-kick combo that was so successful in the first as the champion continued to struggle to find his rhythm. Melendez controlled the pace and dictated where the bout went as the second round wore on. Melendez scored inside as well, landing winging shots in the clinch as he shrugged off the takedown attempts of the champion. Midway through the round, Henderson finally started consistently landing with his kicks but neither fighter could manage to take absolute control in the tightly contested bout.

The champion responded in the third, blistering the legs of Melendez, while alternating his kicks to the body as well. Henderson started to come forward more which he failed to do most of the first two rounds, but still could not plant and secure Melendez on the mat. Melendez slowed later in the round but continued to land short flurries in the exchanges as the champion started to swing the momentum with his kick game.

Melendez came out in the fourth throwing to the body while the champion continued to score with his kicks. The challenger then clipped the champion with a powerful right hand forcing Henderson to change levels and shoot. Again, neither fighter was able to implement their wills inside as the fight resumed on the feet. Henderson went right back to his kicks, significantly damaging the lead leg of Melendez, and as the round ended, it appeared that the final frame may just determine who left the octagon as the champion.

Henderson came out kicking to start the final round, while Melendez showed a sense of urgency, stringing together combinations while the champion retreated. Henderson stayed elusive, stepping in to score with kicks while evading big exchanges. Melendez continued to pursue Henderson looking for an opening to strike, and as the fight ended, the judges were faced with scoring a very close fight.