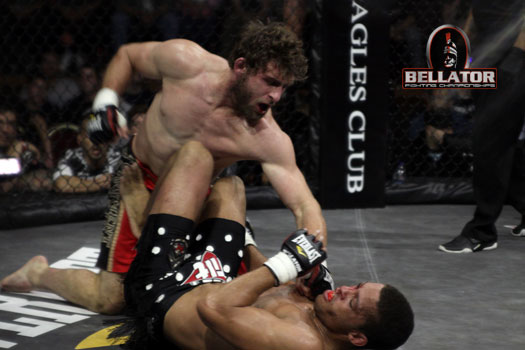 Bellator MMA returns on Thursday night from the Pechanga Resort and Casino in Temecula, Calif. The card features the semifinals of the middleweight and featherweight tournaments. As always, the main card airs live on Spike TV, while the undercard can be seen on Spike.com.

Middleweight Semifinal
Doug Marshall vs. Sultan Aliev
Marshall got a huge knockout in the first round, but it does not really change his profile. First, it was certainly an early stoppage, but not a drastic one. Second, he will still have a punchers chance against guys who stand in front of him. Aliev showed a pretty solid all-around game in the first round. His decision victory over Mikkel Parlo was not earth shattering stuff, but he showed he belonged against a now underrated prospect. Aliev should be able to avoid huge shots from Marshall and take a decision victory. The Guide would call it an upset, but all the books actually have the lesser known Russian as the heavy favorite…

Middleweight Semifinal
Brett Cooper vs. Dan Cramer
The most impressive aspect of Cramer’s first round upset was his gameplan. Prior to the fight, I described him as a wild and somewhat effective striker, but he did not show that against Brian Rogers. He threw punches when he needed to, but he knew his path to victory was in the clinch. However, Cramer will not have an advantage in the clinch here.

Cooper has also been a bit wild in the past. Now, he seems to properly understand that his bread and butter is pressure along the fence with some ground and pound. After his performance in the first round and some upsets, he becomes the new favorite in this field. Look for Cooper to get the better of the clinches and takedowns en route to a decision victory.

Featherweight Semifinal
Marlon Sandro vs. Magomedrasul Khasbulaev
Bellator commentator Jimmy Smith seemed intent on painting Sandro as a spent force in MMA. It is true that he is older than he was when he tour through Sengoku. However, his recent losses are due more to the level of competition. His last three losses are to Hatsu Hioki, Pat Curran and Daniel Straus. He probably would have struggled against those fighters at any age.

Khasbulaev’s performance against Fabricio Guerreiro said more about the Brazilian than anything. He is still young and needs to develop physically. “Frodo” is tough and can come out on top of a scramble. However, Sandro is a much better striker on the feet. The Russian will struggle to take this fight to the ground, and Sandro will outwork him on the feet. Sandro will move one step closer to a Bellator title shot.

Featherweight Semifinal
Alexandre Bezerra vs. Mike Richman
Back when Richman washed out of “The Ultimate Fighter” nobody expected him to go on this type of run. He has been picking up victories over solid fighters and doing it in dramatic fashion. His last knockout over Mitch Jackson impressed even the most casual MMA fans. With that being said, he still relies on his punching power to win fights. In his 16 fight career, he has only been out of the first round three times, and one of those fights apparently ended two seconds into the second round

“Popo” has enough game on the feet to make it into the second round. He is the much better grappler. If he is able to wrestle this fight to the floor a submission finish is not out of the question. However, the smart money is on Bezerra surviving a first round scare and coming on strong in rounds two and three to take a decision.

1 thought on “ProMMANow’s Guide to Bellator 92”