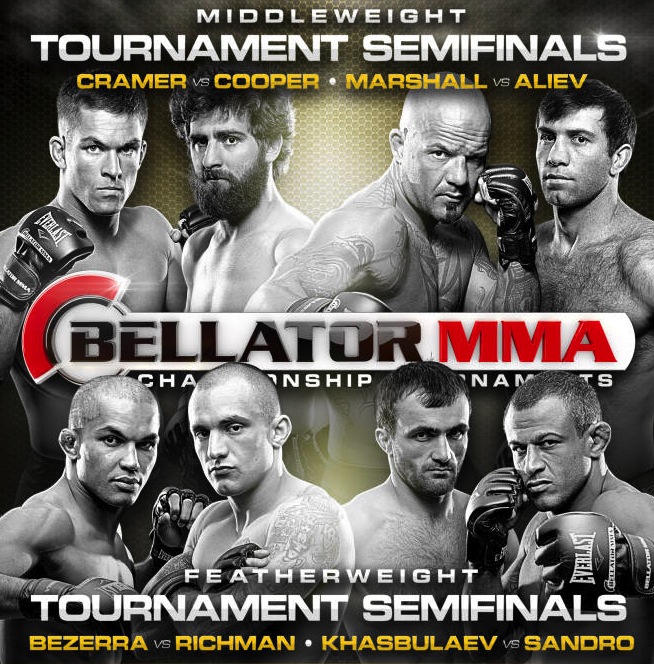 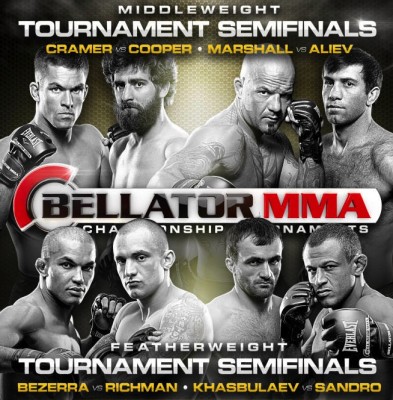 Bellator MMA 92 takes place this evening at the Pechanga Resort and Casino in Temecula, Calif., and features the Season 8 Featherweight and Middleweight Tournament Semifinals.

Be sure to check out Richard Mann’s ProMMANow Guide to Bellator 92 for a complete preview and predictions of tonight’s fight card.

Round 1 – Popo shoots, gets the takedown as Richman tries locking up a choke. Popo gets free and Richman gets to his feet. Popo continues looking for the takedown and gets Richman back down with his back to the cage. Popo hanging on to him trying to hold him down. Popo softens him up with punches from half guard. Moves to side control, then full mount, ground and pound, Richman gives up his back. Popo gets a body triangle, softening him up. Richman defending well against the choke. 1:30 left in the round. This continues the rest of the round. PMN has it 10-9 for Bezerra.

Round 3 – Touch gloves. One two Richman, nice left to follow. Big left hook, front kick from Popo, shoots, stuffed. Left from Richman. Leg kick Popo. Left from Popo, left from Richman. Popo with the takedown, takes top position in half guard. Richman gets closed full guard. Popo passes to side mount, drops some hammerfists and punches. 2:20 to go. Richman gives up his back, Popo gets a body triangle, looking for the choke. Richman spins around and ends up on top inside guard. Richman stands up, ref makes Popo stand. Right left from Richman, body shot. Left from Popo, shoots, stuffed. Richman lands a nice combo, both guys scoring with big shots with 30 seconds left. Popo standing int he pocked and throwing back but Richman giving as much as he’s getting — pretty even exchange. PMN scores final round 10-9, and the fight 29-28 for Popo Bezerra. Great fight.

Round 1 – Cramer counters a leg kick with a big right hand that drops Cooper. He lays inside Cooper’s guard. Cooper gets half guard from bottom. Cramer moves back into full guard, lands a right hand, steps over to half guard. Cramer moves to side control. Knee to the ribs. Cooper trying to get free, gets to his knees, Cramer jumps on his back with one hook in. Now both hooks in. They roll to their backs, Cramer still on his back locked in and softening him up. Cooper tries to spin around but ends up sweeping Cramer before the bell. PMN has the round 10-9 for Cramer.

Round 2 – Cooper shoots right away, presses Cramer to the cage. Cramer grabs a Thai plum, Cooper drops levels. Now looking for the single, lets it go as Cramer grabs the plum, throws three knees to the face, another one. Cooper blocked some of those. Grabs the plum and throws another knee. Body shot from Cooper. Plum and knee again from Cramer, Cooper drops levels. Cramer defends, grabs Plum, knee. Ref separates them. Left hook Cooper. Right hand from Cramer scores as he presses Cooper to the cage. Cooper turns him around in the clinch. Thai plum from Cramer, lands a knee to the body, another knee, they unload a few punches on each other. Cooper drops levels. Cramer bleeding, Thai plum, lands three knees. Cooper with body shots but Cramer lights him up with an uppercut and more punches. Plum and knee from Cramer. Big left hand, another left. Cooper with a right hook. Clinches, drops levels. Time. PMN has it 10-9 Cramer.

Round 3 – Right hand from Cooper, he eats a counter. Misses an uppercut. Two big rights from Cramer, plum and a knee. Left hook from Cramer snaps Cooper’s head back. Cooper shoots, stuffed. Cooper backs out. Left  hook counter from Cooper, again. Right hook from Cramer, Thai plum and a knee. Cooper with an uppercut. Clinch, Thai plum and two knees from Cramer. Right hook from Cooper scores, then gets a takedown. Cooper in half guard controlling from top. Not for long though as Cramer gets right up. Nice punch exchange, Cooper getting the better of it, landing a nice counter. Nice left hook and uppercut from Cooper, big right hand, one more and Cramer goes down and Big John steps in and stops it. Wow! Amazing come from behind win for Brett Cooper. Amazing heart from Cooper.

Round 1 – Dan Hendo in the crowd. Jab from Aliev, he shoots, stuffed. He pushes Rhino to the cage. Body lock trip takedown. Full guard, body shots from Aliev. Right hand from Aliev to the jaw as Rhino tries to make his way up. Closed guard, Rhino holding on. He throws his legs up looking for something but Aliev staying heavy on him and drops several short hammerfists. Marshall gets to his feet. Aliev pressing him to the cage, underhooks, under two minutes to go. KNee from Marshall but Aliev gets another trip takedown. Several big right hands from Aliev as Rhino tries to get up. Rhino with full guard now. Under a minute left. Elbow to the body from Aliev. Herb Dean stands them up. Rhino swings and misses and Aliev gets a big slam before the bell. PMN has it 10-9 Aliev.

Round 2 – Rhino misses a leg kick. Lands a head kick that wobbles Aliev. he shoots, stuffed. Rhino somehow punched himself in the face. Aliev gets the takedown though, much to the frustration of Rhino. Aliev inside Rhino’s full guard. Ref wants action. Boos from the crowd. Ref puts them up much to the delight of the crowd. Rhin o goes after him right away. Leg kick. 2 minutes to go. Left hook Aliev. Body shot from Marshall, leg kick, Aliev times it for the takedown. Rhino gets right up though, lands a left and backs Aliev up. Jab from Aliev. Rhino backs him up, stuffs the shot. Again, knee to body from Marshall, he backs Aliev up. He shoots, stuffed. Big body shot from Rhino. PMN has it 10-9 for Rhino — why? Because of damage. He did more damage plain and simple.

Round 3 – Touch gloves. Flying knee backs up Aliev. Leg kick Rhino. Jab Aliev. Aliev shoots, stuffed. Left hook from Rhino. Jab from Aliev, hook. Aliev shoots, body lock, pulls Marshall to his knees, jumps on his back, gets a hook in. Rhino explodes to his feet, lands a shot. Aliev shoots, stuffed. Big body shots from Rhino. Halfway through the fight. Aliev scoops him down. Rhino very frustrated talking to the ref. Boos from crowd. Aliev gets Rhino to his back, he gets full guard. Ref stands them up. Rhino starts chasing him and Aliev is running. Underhooks from Aliev, drops levels, big shots to the side of the head from Rhino. Rhino landing shots. 10 seconds left, Aliev flops to his back to avoid a flying knee and Rhino goes after him with big punches. Rhino lands a huge right that bounces Aliev’s head off the mat. PMN sees it 10-9 for Rhino and the fight 29-28 for Rhino. Aliev did NOTHING with the takedowns he got and Marshall was actually landing big shots defensively. Aliev was literally running from him at one point.

Round 1 – Leg kick Sandro. Body kick from Frodo. He shoots, stuffed, knee to body from Frodo, again. Sandro with a body lock, knee to the groin and he goes down in pain screaming. Ref halts the action. Big John talking to him. Big John shakes his head. Not looking good. Big John makes him stand up for some reason. He said he wants to see him stand. Big John is honestly getting on my nerves. Why is he telling him what to do here? He literally said, “Suck it up and breathe.” Frodo jumping up and down now, shaking it out.  Well it worked. Maybe John knows what he’s doing after all. Of course he does. He just has that “cop voice of authority” about him thats a bit unnerving. Here we go, they tie up, Frodo gets a trip takedown. Sandro goes for an arm. Frodo escapes. Sandro shoots. Frodo grabs a kimura but Sandro escapes. They square up. Side kick from Frodo. Big right from Frodo, again with another shot. They tie up and Frodo goes for an armbar, it’s tight but Sandro pulls out. Now on top inside full guard. Frodo gets a kimura sweep, locks it up deep, somehow Sandro rolls and escapes. Wow. Frodo on top now unloading punches, almost mounted. Big round for Frodo and great comeback after the groin injury. 10-9 Khasbulaev.

Round 2 – Spinning back kick misses from Frodo as Sandro steps inside. Body kick from Frodo. Big leg kick, clinch against the cage. He gets Sandro down but Sandro reverses and is on top in half guard. Sandro locks up an arm triangle. Frodo punches him in the body and somehow escapes to his feet. Clinch battle, Frodo lands a big left, right on the break then gets the trip takedown. Sandro with full guard. Frodo postures up with big punches, hammerfists. Frodo gets top control, half guard, almost mounted, locks up a straight armbar, lets it go. Sandro gets to his knees and shoots on Frodo as he takes shots to the body. Sandro turtles now as he takes big shots to the chin. PMN has it 10-9 Frodo.

Round 3 – Sandro is looking bad between rounds, breathing very hard. He looks spent. Time is called. They start it up, left hook really quick after the glove touch, then the takedown to follow. Frodo on top in half guard. Moves to side control. North south. Side control. Sandro locks up half guard. Frodo lands punches to the face with crucifix position. Hammerfists from Frodo. Sandro gets to his knees, now feet. Body lock from behind from Frodo. He pulls him to the ground and bloodies up his nose with big punches. Sandro covers up and takes several shots as Big John has seen enough and stops it.