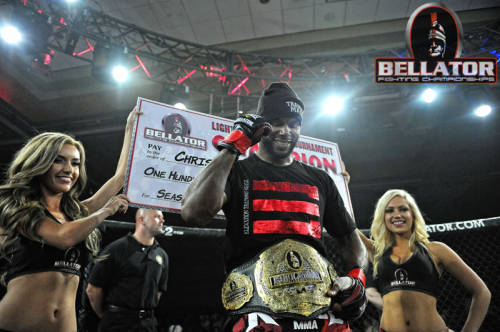 Bellator MMA 91 takes place this Thursday night from the Santa Ana Star Center in Rio Rancho, N.M. As always the main card will air live on Spike TV, while the undercard can be seen on Spike.com. The card features light heavyweight champion Christian M’Pumbu’s first title defense against tournament winner Attila Vegh and the semifinals on the lightweight tournament.

Eating Crow
The Guide missed on two fights from Bellator 90. The first was the huge upset of Muhammed “King Mo” Lawal. The second was Shahbulat Shamhalaev making a highlight reel of Rad Martinez.

Could Emanuel Newton be coming into his own? Newton has seemed like a guy who is ready to take the next step for a long time. However, he has often struggled when given a big spot. Here, he came through in a huge way. Some might say that it was a lucky punch, or more accurately a lucky spinning-back fist. Even before then knockout, it was clear that Newton had worked on his striking and footwork, which have been a weak point for him in the past.

There is movement for the sake of movement, and then there is effective movement. For example, there is Clay Guida who moves around like a back-up dancer and yet still gets hit whenever he closes the distance. Then, there is Shahbulat Shamhalaev who used his footwork to stay out of takedowns and attack with a variety of strikes. On top of that, his hand speed was too much for Martinez to handle.

Bellator MMA Light Heavyweight Title Fight
Christian M’Pumbu vs. Attila Vegh
Both fighters are above average strikers. However, Vegh should have just enough skill on the ground to take advantage of M’Pumbu weaknesses. Despite winning the title, M’Pumbu has been far from flawless. Of course, he did drop a non-title fight to Travis Wiuff. He also looked extremely fallible in some of tournament performances before pulling out surprise victories. Vegh did not deserve the nod over Newton. At the same time, he did prove that he belonged in the Bellator division against better competition than the fighters M’Pumbu faced on his way to the title. Look for a stalemate in the striking department to be broken with better clinch tactics from Vegh.

Lightweight Semifinal
Will Brooks vs. Saad Awad
At the outset of this bracket, The Guide labeled Will Brooks the favorite. So far, the prediction looks pretty solid. On the other hand, Awad was not even in the field until after The Guide was published. Yet, the Millennia MMA veteran pulled off the upset with a miraculous first-round knockout. However, that run should come to an end here. Brooks should have the upper on the feet and in the clinch. Awad will be a tough test, but Brooks should still be able to pull out a decision victory.

Lightweight Semifinal
David Rickels vs. Jason Fischer
This fight already happened. Rickels scored a unanimous-decision victory over Fischer at Bellator 82. Fischer had a solid first round, but then ran out of gas. Rickels took over in the last two rounds and took the fight. Fischer could pull off the upset here if he has worked on his cardio. However, even before getting tired, he was struggling to get takedowns against Rickels. If this fight stays on the feet, Rickels’ kicking game will be too much. Rickels is the better striker, and it will show here.

Ed West vs. Josh Montoya
In typical MMA fashion, most of the fan base and blogosphere has written off West after back-to-back losses. That is of course ignores that his last two losses came against the two fighters who just fought for the Bellator title. West is still a very large bantamweight with above average skills on the floor. Montoya is an exciting guy who can finish a fight in any position. However, he has struggled whenever he has stepped up in competition. Look for West to control this fight with his grappling game from start to finish.

4 thoughts on “ProMMANow’s Guide to Bellator 91”