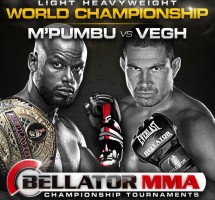 Be sure to check out ProMMANow’s Guide to Bellator 91 for a complete preview and staff writer Richard Mann’s fight predictions.

Round 2 – Mr. Winklejohn and Julie Kedzie are in Holly’s corner, giving her advice between rounds. Nice right from Holm. Nice one two. Body kick from Merrill. Side kick from Holm. Merrill shoots, stuffed. Holm backs out. Nice punch combo from Holm forces the shot from Merrill. She escapes the takedown and unloads a nice punch/kick combo. Body kick from Holm, Merrill catches it and puts her down. Holly gets up but she gets a legit takedown again. Holm gets back up, clinched against the cage. Holm backs out with 2 minutes to go. Big left hook then a right to the body drops Merrill. She gives her a kick to the body on the ground and the ref steps in.

Holm does a backflip in celebration.

Round 2 – Touch gloves. Front kick Rickels. Right from Fischer. Rickels pushes him to the cage with underhooks. Fischer turns him around. Rickels turns him around. Knee from Rickels, right from Fischer on the break. Knee to body from Rickels. Again. Rickels ducks under a punch and gets the takedown. Inside Fischer’s guard. Fischer throws up for an armbar, Rickels gets out of it. Still inside full guard, body shots. Passes to half guard. Goes for the mount and Fischer sweeps him, now on top in half butterfly, now full guard. Fischer postures up, couple body shots. Rickels gets to his feet. Left hand from Fischer. Body kick from Rickels. Left hand from Rickels. He drops levels, Fischer defends and he lets it go. Fischer looks for the takedown. PMN has it 10-9 Rickels.

Round 3 – Touch gloves, trade leg kicks. Leg kick Rickels. Left hand Fischer. Leg kick Rickels, clinched, Fischer backs out, shoots in. Rickels has  a cut over his left eye and it’s bleeding pretty good. Nice punches from Rickels fighting off the takedown, he pushes Fischer to his back and takes top control inside guard. Postures up with a big right hand. Fischer gets to his knees looking for a leg. The Caveman gives him some punches, uses a kimura to put him back on his back, steps over the head and still looking for it, but Fischer escapes with 2:30 to go. Big hammerfists from Rickels inside full guard. Rickels gets full mount, looking for an arm triangle. Lets go the choke, still in mount. Rickels postures up with a couple nice punches. Fischer gives up his back. Rickels gets hooks in, goes for the choke. Fischer rolls to his back, then gives up his back again after eating punches. Rickels boxes his ears, goes for the armbar now with 20 seconds left. Fischer rolls and steps over, ending up on top of Rickels before the bell. PMN sees it 10-9 and 30-27 for Rickels.

Round 1 – Leg kick Brooks. Shoots, stuffed, eats several shots from Awad in the clinch, Brooks is rocked, he shoots in again but eats several punches, Awad is all over him landing bombs and Brooks goes out. Woah! Saad Awad is my pick to win this whole thing. Rickels is going to have his hands full. Saad Awad is dangerous!!

Round 1 – Touch gloves. Leg kick M’Pumbu. Leg kick again. Vegh flashing a feeling jab. Boos from the crowd for the slow start. Overhand right from Vegh backs him up, M’Pumbu with an inside leg kick. Chin straight up in the air. Overhand right drops M’Pumbu, Vegh goes to attack and M’Pumbu sweeps him, ends up inside his full guard. M’Pumbu passes to side control. Lands a right before Vegh stands up, head caught in a standing guillotine position. Knee to thigh from M’Pumbu, again. He backs out. Leg kick inside from M’Pumbu. Leg kick from M’Pumbu. He dodges an attack from Vegh with under a minute to go. Leg kick from M’Pumbu. Vegh comes in swinging, clinch from M’Pumbu and Vegh gives him a hip toss to the ground. Vegh on top with a couple punches before the bell. PMN has it 10-9 for Vegh.

Round 2 – Touch gloves. Front kick M’Pumbu. Leg kick inside. Jab. Big leg kick from Vegh and he chases M’Pumbu down. Leg kick from M’Pumbu. Boos from the crowd. Step in right hand from M’Pumbu. Pawing with a jab. Front kick. Uppercut and a step in right from Vegh, clinches up against the cage and M’Pumbu turns him around. Vegh gets out and they square up. Couple leg kicks from M’Pumbu. Front kick. Chin still straight up in the air. One two, leg kick from Vegh. M’Pumbu shoots, stuffed. Overhand right from Vegh forces the shot from M’Pumbu, stuffed, Vegh pushes him back on his back, inside his guard. M’Pumbu with wrist control. Vegh stands over M’Pumbu, he rolls for a kneebar as M’Pumbu stands, left hand from M’Pumbu, And he gets free and gets full mount on Vegh. Vegh gives up his back and M’Pumbu goes for his arm, trying to lock up an armbar. PMN sees it 10-9 for Vegh.

Round 3 -Leg kick M’Pumbu, again. Flashing a jab. Boos from the crowd. Uppercut from Vegh catches him coming in. M’Pumbu goes down and Vegh takes top control in half guard. M’Pumbu tries to sweep. Now holds Vegh on top with wrist control. M’Pumbu tries to lock up a leg, eats a right as Vegh stacks him. M’Pumbu with hammerfists from his back. Vegh postures up with a hammerfist. Vegh passes to side control and mount. M’Pumbu immediately gets half guard. Ref wants action. Nice hard elbows from Vegh cut M’Pumbu open on the side of his head, hammerfist from Vegh as he stands up over M’Pumbu, dives in with a right. PMN has it 10-9 Vegh.

Round 4 – Touch gloves. Jump front kick from M’Pumbu. Flashes a jab. Chin still straight up in the air. Vegh easily sort of just runs into him and knocks him on his back. That was strange. M’Pumbu sits up, goes for a single as Vegh lands a couple elbows, then stands. M’Pumbu clinched up against the cage, goes for a double as he drops levels. He lets it go and Vegh backs out. They square up. Right from Vegh, then an uppercut backs M’Pumbu up. Lands a left, M’Pumbu covers up, Vegh lands a knee as M’Pumbu shoots for a single. Vegh grabs a single as well. Ref wants action with one minute to go. Big body shots from Vegh. Ref separates them. M’Pumbu breathing hard. He wings an overhand right, shoots, clinch, knee to body from M’Pumbu. Pushes Vegh to the cage. Big boos from the crowd. PMN has it 10-9.