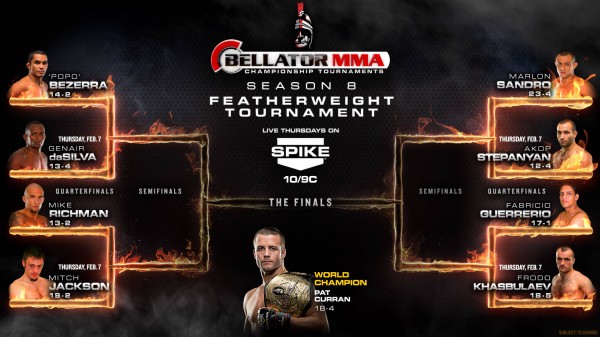 This Thursday, Bellator MMA returns to Spike TV. The card, which takes place at The Arena at Gwinnett Center in Duluth, Ga., features the first round of this season’s featherweight tournament as well as a middleweight title fight between tournament winners Alexander Shlemenko and Maiquel Falcao.

Eating Crow
Last week Bellator MMA’s Bjorn Rebney responded via Twitter to The Guide’s predictions. As fate would have it, last week was also the week that wheels came completely off. After starting the season with a solid record, The Guide went 1-3 with only tournament favorite Will Brooks coming through. The bad news is the record takes a hit (it now stands a dismal 9-6). The good news is that the lightweight tournament will be easy to pick from here on out. Now, on to the featherweights…

Bellator MMA Middleweight Title Fight
Alexander Shlemenko vs. Maiquel Falcao
Falcao is a solid wrestler who can hit with a ton of power. That will not be enough to take out the quintessential Bellator veteran. With the exception of former champion Hector Lombard, Shlemenko has not faced very many top-20 fighters. However, he is still the clear favorite here. The Russian’s style is the model for striking in MMA. He admittedly does not like grappling or even being on the ground. When there, he does a good job avoiding danger and getting back to his feet. In the striking department, he does a good job mixing set-up strikes and full power strikes. This keeps opponents off balance and prevents them from putting together takedowns. Shlemenko should be able to ride his superior striking to a decision victory. Of course, the type of power possessed by “Big Rig” could end the fight at any time.

Featherweight Tournament Fights
Marlon Sandro vs. Akop Stepanyan
In 2012, Stepanyan went 4-0 in Russia before signing with Bellator. In his North American debut, he ran up against former IFL champion Wagnney Fabiano and failed to make it out of the first round before tapping out to an armbar. Stepanyan comes from a traditional striking background and predictably struggles on the ground. Sandro could work a similar gameplan and finish the fight on the ground. The former SRC champion is quite underrated on the ground. However, the fight will probably remain on the feet, and Sandro should still win. With the exception of the Curran fight, Sandro has only struggled against guys who want to clinch him up and take him down. Stepanyan might be able to make some noise with his impressive kicking display, but it won’t be enough. Look for Sandro to control the fight with more technical boxing and take the fight.

Fabricio De Assis Costa Da Silva “Guerreiro” vs. Magomedrasul Khasbulaev
Here there are two fighters with gaudy records and highly questionable opposition. Say what you want about the local scenes in Russia and Brazil, but they certainly provide enough cans to pad a record. Even when considering inflated records, “Guerreiro” still has the better one. According to reports coming out of Brazil, his one defeat to Rafael Addario Bastos was due almost entirely to a bogus stoppage by the referee. “Guerriro” avenged his defeat one month later. Khasbulaev struggled against grapplers early in his career, but not recently. The struggles only stopped when he stopped facing decent ground guys. “Guerreiro” is an extremely well rounded fighter and should not have much trouble finishing this one on the ground.

Mitch Jackson vs. Mike Richman
Until running into Shahbulat Shamhalaev last fall, Richman was another Bellator success story. He was brought in to lose to WEC veteran Chris Horodecki and pulled the upset. “The Marine” then picked up another upset over respectable prospect Jeremy Spoon. He comes out and throws power strikes from every direction. When it works, it is devastating. Jackson has built an impressive record, but it is more accurately described as an “impressive Midwest record.” His last two fights came for a promotion owned by his gym. His opponents, Bruce Johnson and Bobby Ferrier, have a combined record of 16-60. Look for Richman to pick up another devastating knockout and prove that he deserve his nickname more than John Cena.

Alexandre Bezerra vs. Genair da Silva
Interestingly enough, both of these fighters have recent split-decision losses to Marlon Sandro. It is a very close fight. The Brazilians are both solid of the ground (Bezerra is better) and not afraid to trade on the feet. The most significant difference will come in the training department. “Popo” trains full time in the U.S. with Bellator veteran Wilson Reis. On the other hand, Da Silva is still training at Renovaco Fight Team in Brazil and has missed weight for his last two Bellator bouts. This will be a close fight that ultimately ends up going Bezerra’s way due to superior ground skill and conditioning.

4 thoughts on “ProMMAnow.com’s Guide to Bellator 88”