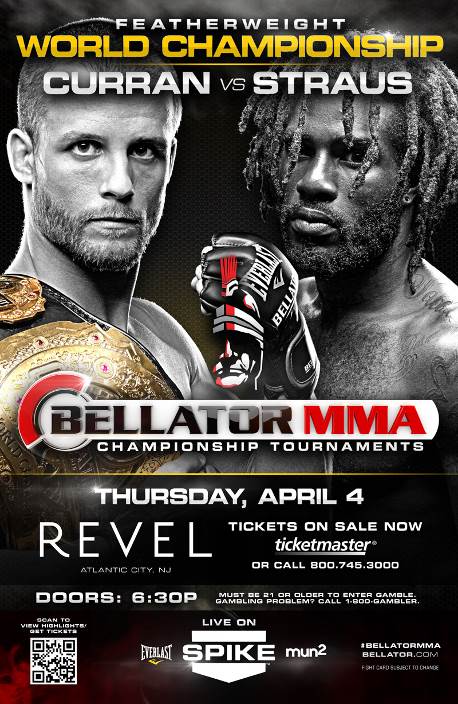 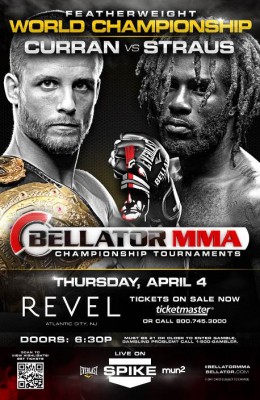 The Bellator MMA promotion will visit Ovation Hall at Revel in Atlantic City, NJ as Pat Curran will put his Bellator Featherweight Title on the line against Daniel Straus live on Spike TV on April 4.

The night will also feature the return of Tiger Schulmann products Lyman Good and Munah Holland, as well as the Bellator debut of New Jersey fan favorite Tom DeBlass.

Tickets go on sale Friday, February 8th at 10 a.m. at all Ticketmaster locations, online at Ticketmaster.com and by calling 800-745-3000. The Main Card will broadcast LIVE starting at 10 p.m. EST on Spike, as well as in Spanish language on mun2. The preliminary card will be streamed LIVE and FREE on Spike.com, with doors to event opening at 6:30pm EST.

“This may end up being the most challenging fight I’ve faced up this point,” Curran said. “Daniel is going to make for a very tough challenge, but I know what I’m capable of. I feel like I’m always growing as a fighter, and the sky is really the limit for me. I’ve got the belt, and I’m not letting anyone take it away from me.”

Curran successfully defended his title on Bellator’s Spike TV debut against Patricio “Pitbull” Freire in January. Straus won the featherweight tournament from season six and earned the right to face Curran for the title.

“Fighting for the Bellator Featherweight Title against Pat just signifies how my career has come full circle,” Straus said. “It was my loss to Pat that motivated me to become a better fighter. Now I get to see how much better I’ve actually gotten. Getting a chance to show my skills on Spike TV is a huge opportunity for me.  The stage keeps getting bigger and the viewers and eyes are growing.  I welcome the challenge to perform well in front of millions against one of the world’s best featherweights.  I feel I have a lot to provide in this fight and I intend on doing so.”

“We’re incredibly excited to be able to bring Bellator MMA to a world class venue like Revel,” said Bellator Chairman & CEO Bjorn Rebney. “This fight card is going to be a great way to close out our first season on Spike TV and I couldn’t think of a better place to host it than a classic fight town like Atlantic City.”

The night will also feature the return of New York native and former Bellator Welterweight World Champion as Lyman Good battles Renzo Gracie product and fellow New Yorker Dante Rivera. Both have strong followings in the Tri-State area and should have a strong show of support inside Revel.

Currently ranked as the world’s top ranked 125 pound female fighter, Jessica “Evil” Eye returns to the Bellator cage when she takes on Tiger Schulmann’s own Munah Holland on April 4th live on Spike TV. Eye is coming off the biggest win of her young career with a dominating performance over Zoila Gurgel and is looking to keep the momentum with another victory.

“As a woman in this sport you’re given very little, so that’s why when I fight we always need to deliver,” Eye said. “I think Munah is a great fighter and have always admired her striking ability, but I won’t let my admiration stand in front of my determination. This is my golden year, and this fight is just the beginning.”

The preliminary card will be highlighted with a middleweight showdown between New Jersey star Tom DeBlass and New York native Carlos Brooks as the two look to collect their first Bellator victory. After announcing his retirement in 2012, DeBlass has returned to the cage and will make his highly anticipated return April 4th inside Revel.

“I’m very excited to be fighting for Bellator right in my backyard,” DeBlass said. “All of my friends, family, students, and many fans will get to see me live. I’m coming back and making a statement, you can count on that.”