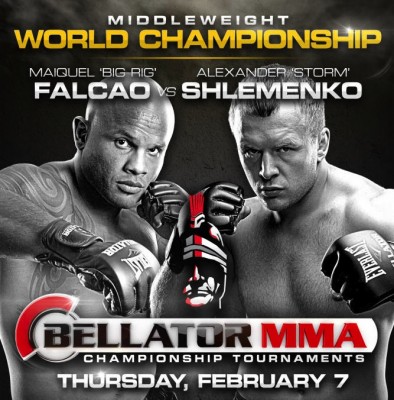 Fighter weigh-ins for Bellator 88 took place this afternoon at The Arena at Gwinnett Center in Duluth, Ga., the same location that will host Thursday’s fight card featuring all four Season 8 featherweight tournament quarterfinal match-ups, as well as a middleweight championship bout between Alexander Shlemenko and Maiquel Falcao for the vacant Bellator 185 pound title.

Shlemenko weighed in at 184.8 pounds, while Falcao tipped the scales at exactly 184.8 pounds as well. Falcao was talking on his mobile phone during the face-off, clearly implying he is not concerned or bothered by his opponent.

All fighters made weight, however, there preliminary card bouts were deemed catchweights with substantial pound differences between the fighters, indicating there were those who were not going to be able to make their originally agreed upon contracted weight.

The full Bellator 88 weigh-in results are as follows:

Be sure to check out ProMMAnow.com’s exclusive pre-fight interview with Alexander Shlemenko, who is predicting a quick knockout win over Maiquel Falcao.