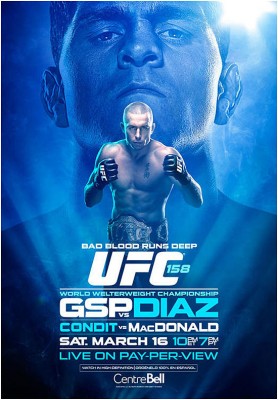 The Ultimate Fighting Championship is holding a press conference today in Montreal, Quebec, Canada for “UFC 158: St-Pierre vs. Diaz”, which is scheduled to take place March 16 at the Bell Centre. Tickets go on sale this week and UFC welterweight champion Georges St-Pierre and challenger Nick Diaz are scheduled to appear at today’s presser to kick things off and get the Canadians hyped up to buy some tickets.

However, this is the very same setup prior to UFC 137 when St-Pierre and Diaz were supposed to fight the first time… and we all know what happened. Nick no-showed the press conference and ultimately the UFC brass took his title shot away. But King George has requested this match-up again, the fans want this match-up — and today, I guess we’ll find out if Nick Diaz really wants this match up.

Today’s UFC 158 press conference with Georges St-Pierre and Nick Diaz is set to begin at 10 a.m. ET (7 a.m. PT). That sure is early Stockton time — especially for someone who partakes of the medical marijuana. It should be good entertainment either way. If Nick shows up, you know he’s going to have to answer questions about what would have happened if he didn’t show up. And if he doesn’t show up, then Georges and Dana are going to be bombarded with questions about why they think he didn’t show up. Either way, we win!

1 thought on “Live stream: Will Nick Diaz show up at today’s UFC 158 press conference? Tune in to find out”