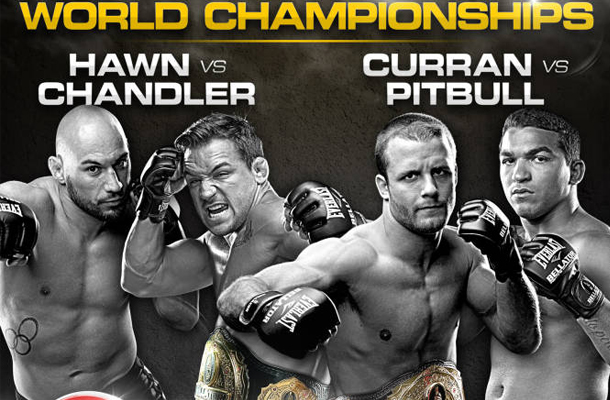 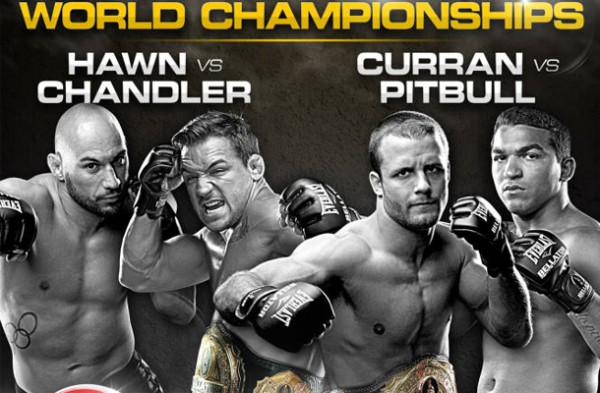 Bellator Fighting Championships returns for the eighth season. This season marks the promotion’s return to Thursday nights and their debut on Spike TV. The highly anticipated move to the former home of the UFC is expected to propel the promotion forward. Bellator 85 features a pair of title fights and the first three bouts for the light heavyweight tournament. Lightweight champion Michael Chandler will defend his title against Rick Hawn. Tournament winner Patricio “Pitbull” Freire will attempt to displace featherweight champion Pat Curran.

Lightweight Championship Fight
Michael Chandler vs. Rick Hawn
For his career, Hawn has made a living either knocking people out or wrestling/clinching his way to a decision victory. Neither one of those paths to victory are available to him here. Chandler is the much better wrestler and probably hits harder as well.

Chandler’s career journey has been impressive. It is a perfect example of what Bellator can do for a young prospect. He began with a few fights against unknowns. He then moved into a tournament and eventually to a title fight. The Chandler that showed up against Eddie Alvarez was better than the one that went to the wire against Patricky “Pitbull” Freire. In his last fight, he entered the cage against Akihiro Gono as the champion for the first time. He played the part of insurmountable intimidator well and finish the fight in less than a minute.

The champion could easily wrestle his way to a five-round fight here. Hawn only real hope is to swing for the fences on the feet and hope for the best. Chandler should be able to wear him out and pick up a late finish.

Featherweight Championship Fight
Pat Curran vs. Patricio “Pitbull” Freire
Instead of typing up what I said on The MMA Outsider Podcast, you can just click and listen. The short version is Curran by decision.

Light Heavyweight Quarterfinal
Renato “Babalu” Sobral vs. Mikhail Zayats
There seems to be a general feeling that “Babalu” is in decline. That might be true. He is on the wrong side of 35, and he is 2-2 in his last four fights. However, those two losses are his only since 2007 and against former Strikeforce champions Gegard Mousasi and Dan Henderson. In his last fight, he showed that his grappling is still sharp with a 31-second submission of Tatsuya Mizuno. The Japanese fighter is not as frail as his body type would leave you to believe.

Zayats is almost the quintessential M-1 Challenge veteran. He can mix it up with lower level competition, but against better fighters his lack of defensive grappling will lead him to defeats. He will really need to turn it up on the feet to win this one. “Babalu” is the better grappler and won’t have too much trouble taking the fight to the ground. Forecasts for Zayats are even more negative since he could not finish the unsturdy Vinny Magalhaes in two-plus rounds. Look for “Babalu” to do some work on the feet before finishing via submission.

Light Heavyweight Quarterfinal
Seth Petruzelli vs. Jacob Noe
Noe is a solid offensive striker with an amateur boxing background. The gambler’s pick would be to take the lesser known fighter and hope he can win a standing contest. However, despite his boxing background, he is still very hitable on the feet. During his 10-fight career, he has only defeated 2 fighters with a winning record. Petruzelli is not a lot of things, but he is a solid striker who should be able to win fights on this level. Noe has a beginner’s chance, which is to say we have seen lesser known guys come into Bellator and tear it up before, but the safe money is on Petruzelli.

Light Heavyweight Quarterfinal
Emanuel Newton vs. Atanas Djambazov
Bellator loves to bring in guys riding a winning streaks filled with a lot of finishes. Djambazov fits that mold, but let’s take a closer look at his 10-fight winning streak. During the run, he has bested nine fighters (poor Ilija Loncar, 5-11 career record, got finished twice). The combined record of those nine fighters is 51-62. If you remove Djambazov’s last opponent Valdas Pocevicius, career record 33-31 and currently riding a nine-fight winless streak, the record falls to 18-31. Even with the streak, Fight Matrix still has him ranked as the 124th best light heavyweight in the sport.

Newton is the better fighter here. Perhaps Bellator is giving him a showcase fight, because they, like the rest of the world, knows that he got jobbed again Attila Vegh in the last light heavyweight tournament. He still needs to work on his wrestling. If he has, he should be able to rag doll Djambazov all over the cage. Even if he has not, Newton should still be able to win with relative ease.